Former Prime Minister Silvio Berlusconi also donated 10 million euros to the hospital, set up in one of the cities and regions most hit by the coronavirus outbreak.

By Luisa Zargani and Sandra Salibian and Martino Carrera on March 17, 2020

A woman wearing a face mask walks past the deserted Galleria Vittorio Emanuele II amid coronavirus outbreak in Milan.

MILAN — The city of Milan and the Lombardy region have been hit the hardest by the coronavirus outbreak in Italy, reporting 14,649 who tested positive for the virus and 1,420 dead as of Monday. So much so that a new hospital dedicated to patients affected by COVID-19 is being set up in the former fairgrounds in Milan. The hospital is expected to feature more than 400 intensive care units.

The Lombardy region and Fondazione Fiera Milano have already begun to set up the space and the hospital, covering 270,000 square feet, is expected to be ready in about 10 days.

Help is already flocking in. Moncler is donating 10 million euros to the project. “Milan is a city that has given us all an extraordinary [life],” said Moncler chairman and chief executive officer Remo Ruffini. “We cannot and must not abandon it. It is everyone’s duty to give back to the city what it has given us so far. I have expressed to the councilor Giulio Gallera the will to work on this great project from the moment it was imagined and now that there are reasonable certainties on the feasibility, we are ready to support it. I am sure that the team of the Region of Lombardy, also facilitated by the experience of Guido Bertolaso [who is consulting with Lombardy’s governor Attilio Fontana], can bring this great initiative to become a reality as soon as possible.”

The management of Italy’s leading supermarket chain Esselunga is also pledging 10 million euros to the cause. Giuseppe Caprotti, son of the company’s late founder Bernardo, announced he has created a foundation supporting medical therapies in Lombardy and aiding those affected by the COVID-19 spread.

With its units temporarily shut down by the national lockdown, this week Burger King Italia teamed with volunteers supporting the country’s Red Cross, the Caritas and CSV organizations to distribute more than eight tons of food to those in need and to a selection of hospitals in Milan and Rome.

Trussardi launched a fund raising project dubbed #ConBergamo to support the intensive care unit of the Papa Giovanni XXVIII hospital in Bergamo, which was the hometown of the fashion company’s founder Dante Trussardi and is one of the cities most affected by the COVID-19 outbreak as it registered the death of over 300 citizens in one week.

In particular, all proceeds of sales made on the brand’s e-commerce by March 31 will be donated to the Bergamo-based Cesvi organization to facilitate the purchase of life-support machines for the hospital.

“Bergamo is the place where everything started,” said the company’s president Tomaso Trussardi. “Since 1911, when my grandfather Dante Trussardi founded the namesake Premiata Fabbrica di Guanti [glove manufacture,] the city has always showed its proximity to my family and has contributed to our history with local creatives and artisans: it’s a bond that lasts from three generations. Our commitment now is dedicated to cure the people who are risking their lives because of the coronavirus.”

The Agnelli family made a personal donation of 10 million euros to the Protezione Civile, the country’s civil defense, and the La Stampa Specchio del Tempo foundation that is raising money to face the outbreak in the Piedmont region.

Through the family’s Exor N.V. holding company and its controlled businesses, the Agnellis have also partnered with the Ermenegildo Zegna group and Fondazione Pesenti to source from abroad 150 respiratory devices and sanitary equipment to be donated to the country, while long-term car rental company Leasys, also controlled by the family, is offering the Italian Red Cross and other non-for-profit organizations a fleet of vehicles to facilitate the home delivery of food and drugs to those in need.

Strong support also came from China, as the Alibaba Foundation and the Jack Ma Foundation have donated 1 million sanitary masks and 100,000 medical swabs to the Italian Red Cross to fight the coronavirus outbreak in the country.

The first batch, including half a million masks and 100,000 test kits, was delivered in Rome on Tuesday. In particular, the medical supplies were carried in a special packaging bearing the score of the “Nessun Dorma” aria included in Giacomo Puccini’s “Turandot” opera, as a message of hope and resilience. The second batch will be delivered by the end of the week. 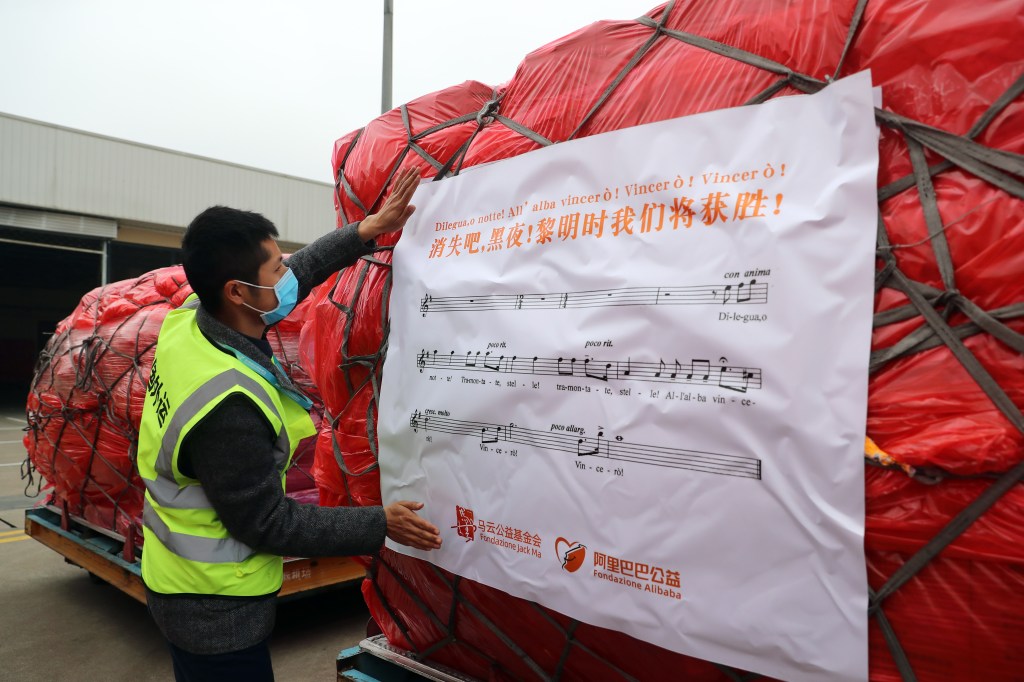 The Italian donation is part of a wider initiative implemented by the two foundations which pledged to gift more than 2 million masks and test kits to Europe. They will also provide medical supplies to Spain, Belgium and the U.S. and have already financed researches to treat the COVID-19 in China as well as at the Columbia University in the U.S. and the Peter Doherty Institute for Infection and Immunity in Australia.

The list of donors fighting the health emergency continues to grow, as the likes of Giorgio Armani, Donatella Versace, Gucci’s Marco Bizzarri, Prada and Bulgari are only some of the industry figures and brands that have made donations.