By Luisa Zargani and Samantha Conti and Alessandra Turra on June 20, 2016
View Slideshow 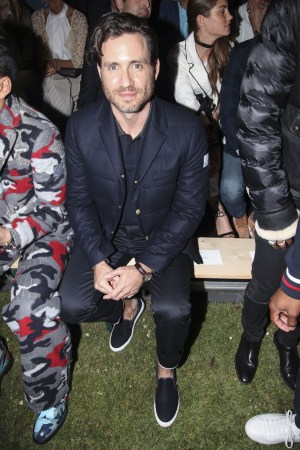 Sincerely Jules and Bandier Team on First Collection for Amazon

Front-row guests at Moncler Gamme Bleu included NBA star Serge Ibaka and the Venezuelan actor Édgar Ramírez. They were hanging out by a pine tree, part of Moncler’s forestlike set for the show.

“I was actually at Pitti Uomo before this, checking out all of the sartorial designs,” Ramírez said. “My grandmother was a tailor, so nobody can fool me. I know about good tailoring.”

Ramírez has been busy promoting his film “Hands of Stone,” and will also star in the upcoming “The Girl on the Train,” which comes out in October and is based on the best-selling book, and “Gold,” which comes out in December, in which he stars alongside Matthew McConaughey.

Ibaka, who was so tall he could have easily placed a star at the top of the tree, said that with the basketball season finished, he was just spending time relaxing. “That’s what I’m doing here.” He’s back training in a week’s time, he added.

Californian singer T. Mills, a newcomer at Milan Fashion Week, said he had just released a surprise album called “Why You Wait.” “Now I’m prepping my debut full-length and I’ve a Netflix original series that just came out with Will Arnett called ‘Flaked,’” he said.

Chairman and chief executive officer Remo Ruffini said ahead of the show that he was “very satisfied with the performance of the first quarter,” also in light of the markets’ volatility, and that the company is focused on expanding its business in the U.S. with the opening of a flagship on New York’s Madison Avenue in October.