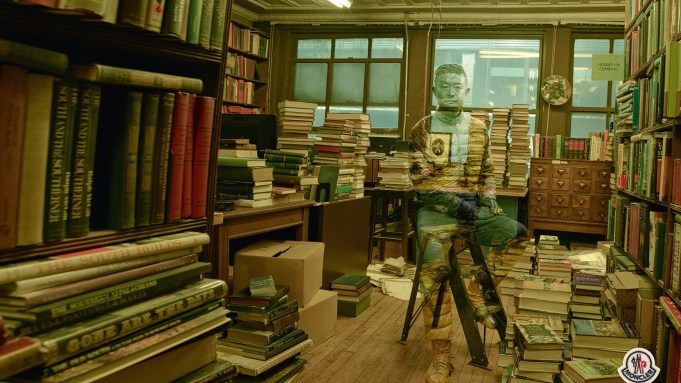 Here’s an idea for a fashion advertising concept that seems ripped from a “Zoolander” script: Make the merchandise and model virtually invisible in the campaign photographs. In all seriousness, that was the concept Moncler went with it for its spring campaign, shot again by Annie Leibovitz. The photographs were done in collaboration with Chinese performance artist and photographer Liu Bolin, known in the art world as “the Invisible Man.” One of his best-known series, called “Hiding in the City,” features self portraits in which he camouflages himself with paint so he blends into his landscapes.

Bolin reprised that concept for Moncler, working with them on a special snowsuit worn in every shot, which he painted to match the background, whether a forest or a book shop. “When I disappeared into the oldest bookstore in New York City and Central Park while wearing Moncler, I reflect on the development of our society, as well as human civilization,” said Bolin.

“The concept of advertising campaigns at Moncler has little to do with the average conception of it. The great masters of photography we worked with for our institutional campaigns have always created works for Moncler that stopped time to reveal a specific moment and were able to capture thoughts, feelings or sensations….,” said Remo Ruffini, chairman and president of Moncler. “[Bolin] is an amazing talent: He can blend into any surroundings he chooses, making himself practically undetectable to the human eye. A perfect blend between great artistic ability and extreme patience. Two qualities that you cannot help to admire.”