The designer dressed her mother in a gold-beaded and lace gown for her parents' 50th wedding anniversary bash. 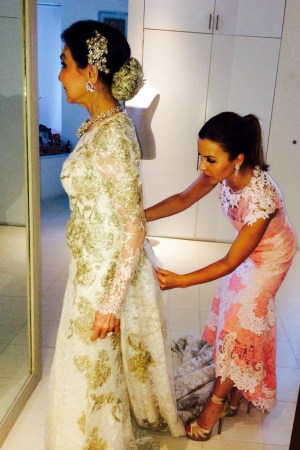 ALL IN THE FAMILY: Monique Lhuillier dressed her mother in a gold-beaded and lace gown for her parents’ 50th wedding anniversary bash in the Philippines over the weekend.

Lhuillier said she began designing her mother’s gown in earnest around a year ago. “What I wanted to do was take elements of her original [wedding] gown, so we took it out of the box after being there for 48 years.  We found it in really great shape, and there was something so beautiful and timeless about that dress.  So I had her put it on and the wonderful thing is that it still fit!”

“Then I did this beaded antique gold overlay covering the entire outfit to incorporate gold into this dress.  I dusted beads on her shoulders, her sleeves and then it trickled down the waist and the sides of the skirt.  In the back, I drizzled it all over the entire train. After all, it was a golden wedding anniversary!  My mother looked like a queen that night,” the designer said of the celebrations in her hometown of Cebu.