Monsters of Fashion Exhibition to Open in Paris

The exhibition was inspired by the transformative nature of contemporary fashion and animated characters in the digital age. 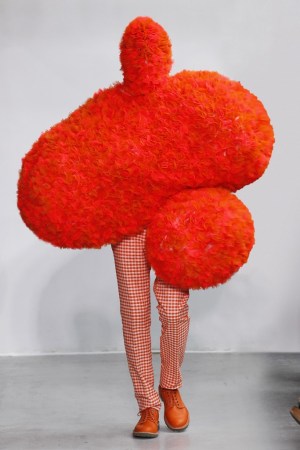 MONSTER BASH: The exhibition “Arrrgh! Monstres de Mode” (or “Arrrgh! Monsters of Fashion,” in English), which opens in Paris’ Gaîté Lyrique museum on Feb. 13 was inspired by the transformative nature of contemporary fashion and animated characters in the digital age. Created in conjunction with the Greek nonprofit Atopos Contemporary Visual Culture collective, it features more than 80 fashion looks and installations by 55 artists and designers, who were chosen for their experimentation with atypical forms and extreme volumes. These include Alexander McQueen, Walter Van Beirendonck, Maison Martin Margiela, Issey Miyake and Dai Fujiwara.

The exhibit — an offshoot of the Pictoplasma festival from December 2011, also at the Gaîté Lyrique and created with Atopos — runs through April 7.