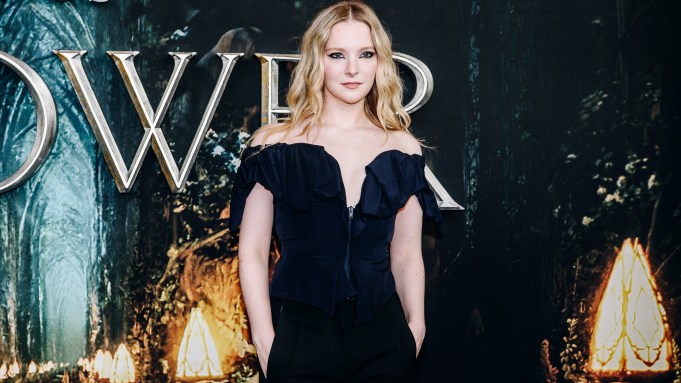 Morfydd Clark is continuing her streak of standout fashion moments.

On Tuesday, the Welsh actress attended the New York City premiere of “The Lord of the Rings: The Rings of Power” at Film at Lincoln Center. Clark wore a Vivienne Westwood corseted top and black trousers and pumps. She wore her blond hair down in loose curls and wore cat-eye makeup.

She was styled by Nicky Yates, who has dressed her for the premieres in Los Angeles and in Mexico City. The stylist also works with Daisy Edgar-Jones, Phoebe Dynevor and Carey Mulligan.

Clark is part of the main cast of the upcoming Prime Video series, which is a prequel to the blockbuster trilogies of “The Lord of the Rings” and “The Hobbit,” both of which are based on J. R. R. Tolkien’s books of the same name. The two were adapted into popular movies directed by Peter Jackson, accruing billions of dollars in total box-office revenue.

She has been tapped to play Galadriel in the show, which is set thousands of years before the events of “The Lord of the Rings” and “The Hobbit,” the latter of which is a prequel to the former. In the films, Cate Blanchett portrays Galadriel.

Joining Clark at the premiere were her costars including Robert Aramayo, Cynthia Addai-Robinson, Ema Horvath, Nazanin Boniadi, Benjamin Walker, Charlie Edwards and Markella Kavenagh, among others.

Aramayo has been cast as another lead role in Elrond, the Elven architect and politician. In the films, he later becomes Lord Elrond and is portrayed by Hugo Weaving.

In 2017, Amazon purchased the television rights for “The Lord of the Rings,” making a five-season production commitment worth at least $1 billion, which makes it the most expensive TV series ever made to date.