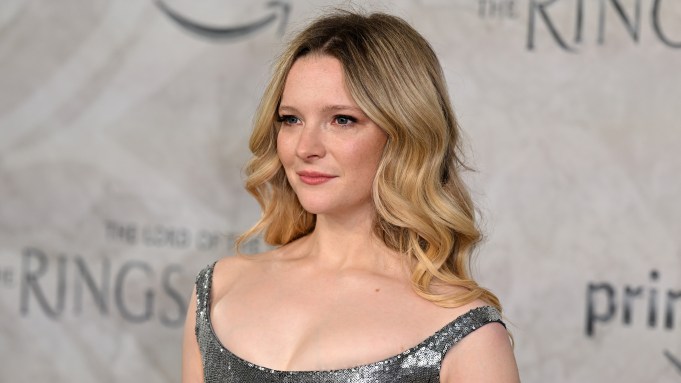 Morfydd Clark looked to Vivienne Westwood again for her latest appearance during “The Lord of the Rings: The Rings of Power” world premiere in London Tuesday night.

The actress, who plays a young Galadriel in the Prime Video series, attended the premiere wearing a silver sequined, off-the-shoulder gown from Vivienne Westwood. Her look was styled by Nicky Yates.

Clark was joined at the premiere by many of her costars, including Ema Horvath, Benjamin Walker, Nazanin Boniadi and many others.

This is the second time Clark has worn Vivienne Westwood at a premiere for “The Lord of the Rings: The Rings of Power.” At the show’s New York City premiere on Aug. 23, the actress wore a corseted black top and loose-fitting trousers from Vivienne Westwood.

Clark spoke with WWD about taking on the role of young Galadriel, saying: “The character of Galadriel, she encompasses a lot of things. She’s thousands of years old, she’s older than the moon. She’s a living myth and legend and she’s very powerful. It was really exciting to play someone with such power.”

“The Lord of the Rings: The Rings of Power” debuts on Prime Video on Sept. 2.