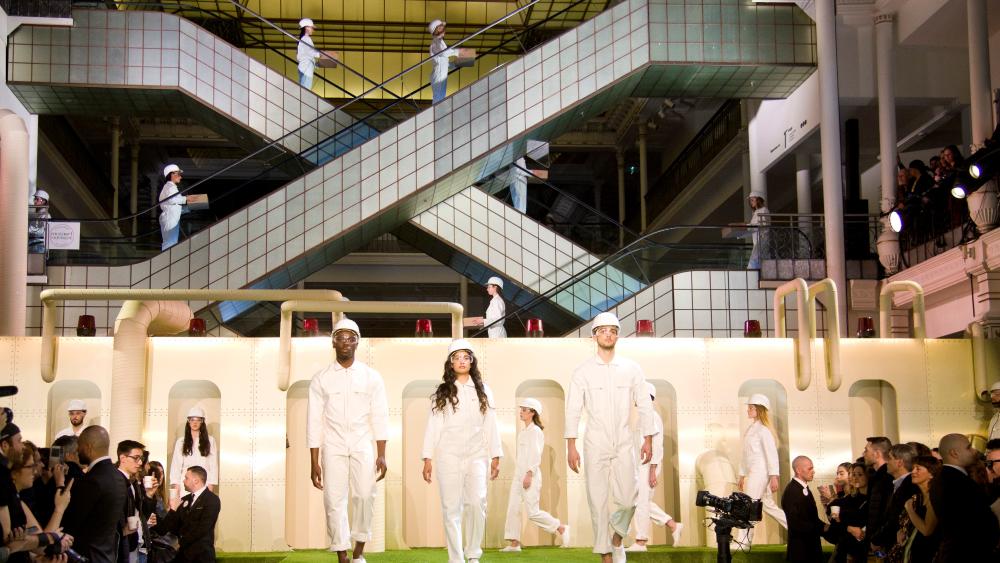 INDUSTRIOUS WORKS: Over a thousand people turned up to see a new factory that cropped up on the Left Bank of Paris, leaning over balconies to capture glimpses — and video footage — of the fanciful lineup that came churning out through a buzz of activity.

Mosaert, the creative collective built around Belgian singer-songwriter Paul Van Haver, who is known as Stromae, had transformed Le Bon Marché into a fantasy factory, complete with tubes, riveted metal panels and workers in white coverall suits and safety glasses. The label’s Friday night fashion show featured models as performers, who stood tall and still, then moved in unison, froze suddenly and broke out into different poses before charging down the runway, buns on their heads and decked out in a whimsical lineup of streetwear with delicate Art Nouveau patterns. In the background, workers rose up and down the store’s iconic elevator bank, standing still — immune to the catchy new Stromae soundtrack.

The 1,500-strong crowd that turned up for the inaugural event was served up mini-pots of mussels, French fries, frikandel hot dogs, Belgian beer and Champagne — which is what Ellen von Unwerth was sipping out of a paper cup after the show.

“I loved the fashion show, I loved the clothing, I loved the choreography — the robot style — I loved the dancers, it was quite different,” she enthused. The only thing missing, in the photographer’s view, was a musical performance by Stromae. “I’m a fan,” she said.

Sonia Iraguha, a 25-year-old Rwandan graduate student at the International Fashion Academy in Paris, had her eye on a pair of shorts, and lauded the collection’s gender-neutral nature.

Guests entering the upscale department store were greeted with an elaborate, mechanical display of shirts, jackets and shorts that slowly rotated along a rack. While some stopped to take in the movement, and the clothing, or slip on a pair of headphones in front of a screen relaying a film about the production, Clotilde Coureau sped past — the show was about to begin, and it was time to angle for a viewing spot from a balcony.

Van Haver, his stylist wife Coralie Barbier and his brother Luc Junior Tam changed out of their factory coveralls after the show and headed to the ground floor to mingle with the crowd of well-wishers.

“It was cool, a lot of emotion — Coralie teared up, which is normal — this is the outcome of so much work,” said Van Haver, who wore a polo shirt with a zipper at the top, his hair in a bun.

Barbier, with her long hair down, chimed in: “We are super happy. And super happy that so many people turned up.” She noted a sense of relief, too, that the show came off as planned, given the scarcity of practice runs.

Beatrice Arosio, a communications executive, was seated near the runway after the show, at the edge of a colorful display of merchandise including clothing, tableware and shoes.

“Very fashionable, surely better suited to my 20-year-old daughter than me,” was her assessment, as a display of sliders and dishes rotated behind her.