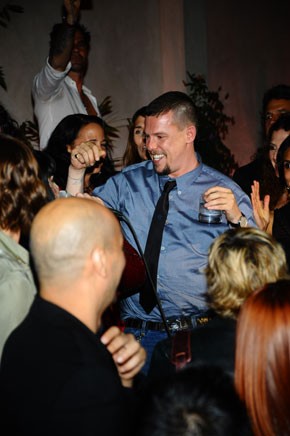 Alexander McQueen jetted into Los Angeles for a one-night-only engagement at his new Melrose Avenue store.

To be sure, it wasn’t a typical store opening party. There were hordes of people, yes, but in true McQueen fashion, the crowd ranged from Vidal and Ronnie Sassoon to Janet Jackson to Lisa Eisner. Most people – including Elizabeth Banks, Joy Bryant, Eve, Jamie Tisch, Elizabeth Callender, Anthony Kiedis and Tony Alva – only only took a cursory glance at the ultra-modern store, then headed out the back door to the parking lot, which was done up in a red and black Asian theme complete with hanging lanterns and mirrored pillars and bars.

McQueen climbed up on a giant stage to introduce his “new friends,” the punk-soul band The Gossip. “She’s going to look fierce tonight,” he said of the red sequin pantsuit he designed for curvaceous lead singer Beth Ditto.

Apart from “people watching at the Chateau [Marmont]” McQueen didn’t have time to do much else in L.A. “I’ve got collections to design,” he said.