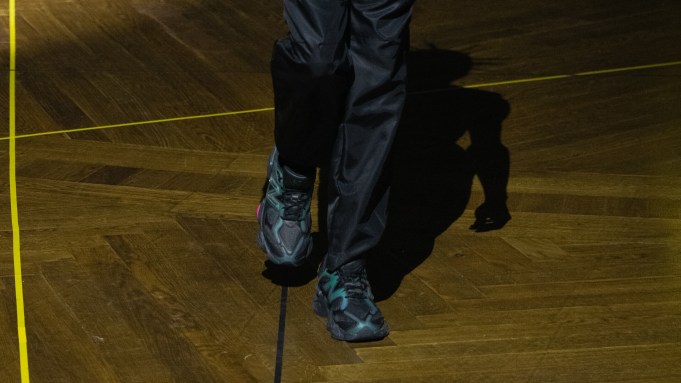 Mowalola’s first collaboration has been unveiled — and it’s with none other than New Balance.

The two brands have teamed to make a shoe, which made its debut at the London-based designer’s spring 2023 show in Paris this week. The sneaker will have two colorways of the New Balance 90/60 style and is largely inspired by the brand’s 990 series and running silhouettes from the early Aughts.

Each shoe is mostly black, but one is accented with purple with a hint of neon yellow on the soles while the other is with teal and hot pink.

The shoes are scheduled to launch this fall in New Balance stores and select retailers. An exact date has not yet been revealed.

There were cropped suits baring hipbones; hooded minidresses with a vertiginous décolletage; bumster trousers that dipped so low they could have been waders, and long gowns with laced fronts.

Backstage, Ogunlesi explained that she had looked at “different kinds of thieves” in a way of showing that “no one’s actually a good person.” It was the designer’s way of expressing the duality that exists within all of us, “without shaming anyone [by] just acknowledging [that side] exists,” she said.