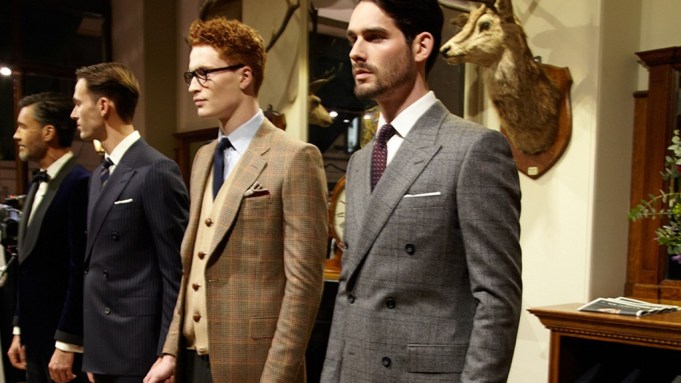 SHOPPING THE BIG SCREEN: When the Matthew Vaughn-directed spy movie “Kingsman” opens Jan. 29, viewers won’t have to be content with just admiring the slick wardrobe that Colin Firth, Samuel L. Jackson and Michael Caine wear in the film.

Instead — thanks to a collaboration between Vaughn, Mr Porter and the film’s costume designer Arianne Phillips — customers of Mr Porter will be able to shop a 60-piece collection of looks from the film, which Mr Porter describes as “the classic British gentleman’s wardrobe.” Mr Porter showcased the collection at Huntsman on Savile Row Saturday night, ahead of its launch later this month on the online retailer. The location was an appropriate one, as the Huntsman shop is the setting for the fictitious Kingsman tailor in the film, which the spies use as their cover. Looks on display included a velvet smoking jacket, tartan pants and a chalk stripe suit, all of which Firth wears in the movie.

“Matthew Vaughan called me last year at six in the morning, and told me he had this movie about British spies whose base…was a tailor’s shop on Savile Row — and that he wanted me to do the costumes,” said Phillips at the launch. The costume designer has worked with labels such as shoemaker George Cleverly, Drake’s ties and Turnbull & Asser shirts to create pieces for the Kingsman collection. And Phillips said she was excited at the prospect of viewers being able to buy into the look of the film. “I’ve often designed costumes for movies and people have come to me saying ‘How do I get this?’ but it’s impossible as they are one-offs,” she noted. That said, the designer hasn’t recreated the movie costumes entirely for Mr Porter — while many of the actors’ suits were made from bullet-repelling Kevlar, the retail version will be in a more appealing British wool.