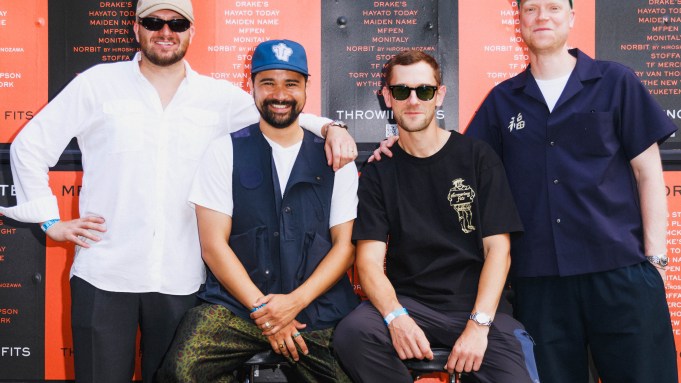 Mr Porter and podcast “Throwing Fits” celebrated their partnership with a semi-block party in the popular Lower East Side Manhattan bar on Chrystie Street.

Designers that took part in the project also participated in the festivities, including Connor McKnight.

McKnight said about the partnership, “I’ve admired the guys for a long time and recognize the community they’ve built around fashion and lifestyle. Tonight is big because it’s a new partnership with a new store. Mr Porter is one of the most regarded retailers in the industry and it’s exciting.”

In addition to McKnight, David Lê of Maiden Name, Hayato Arai of Hayato Today, Agyesh Madan of Stòffa, and Tory Van Thompson were a few of the other designers who participated in the project and attended the event.

“It’s one of the first big events I’ve been to post COVID-19,” said James Garcia, senior manager of footwear, special projects and collaborations at Kith. “There’s energy in the city and such a mix of cool people.”

Schlossman and Harris first met at BPMW in the early 2010s but started their show hosting careers in the mid-2010s for Complex with their show Fashion Bros and podcasting with “Failing Upwards.” They later started “Throwing Fits” and where they discuss menswear and everyday topics and random musings.

Prior to teaming with Mr Porter, they partnered on collaborations with Drake’s, Diemme and Blackstock & Weber.