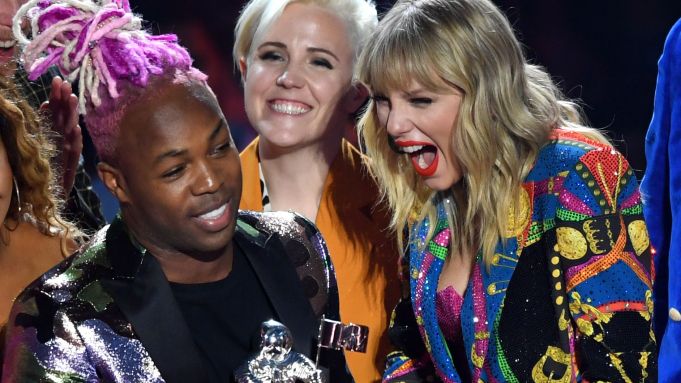 The MTV Video Music Awards are always one of the most unexpected awards shows, and this year’s did not disappoint.

While the red carpet had its own fair share of memorable moments — including Gigi and Bella Hadid twinning in Tom Ford and Charlotte Knowles London, respectively, Lizzo in custom Moschino and H.E.R., who accessorized her look with a live snake — the awards show itself was jam-packed with memorable performances and speeches by some of the year’s biggest musicians.

1. Shawn Mendes and Camila Cabello Nearly Kiss During Their Performance of “Señorita”

As rumors have circulated over the last few weeks on the pair’s relationship, Shawn Mendes and Camila Cabello performed their hit duet, “Señorita,” against a candlelit stage, adding more fuel to their reported romance, while the cameras panned to Sophie Turner and Nick Jonas, whose jaw-dropped expressions echoed the sentiment on Twitter.

Normani, who along with Cabello were part of the girl group Fifth Harmony, made her solo MTV VMA debut, re-creating the music video for her new song, “Motivation.” The singer proved she’s a force to be reckoned with, showing off her impressive dance skills.

This year’s recipient of the MTV Michael Jackson Video Vanguard Award, Missy Elliott took the VMA stage to perform a medley of some of her biggest hits, including “The Rain,” “Get Ur Freak On,” “Lose Control” and more. For the performance, Elliott reunited with dancer Alyson Stoner, who appeared in the rapper’s original music video for “Work It” when she was nine years old.

Miley Cyrus took the MTV VMA stage for the first time since news broke that the singer and her husband, Liam Hemsworth, would be splitting up after 10 years together. Cyrus performed her new single, “Slide Away,” which is reportedly about the split.

Lil Nas X and Billy Ray Cyrus won one of the night’s biggest awards — Song of the Year — for their hit song, “Old Town Road (Remix).” The rapper, dressed in an embellished red suit with a matching cowboy hat, took the stage to give his speech, jokingly taking out a lengthy scroll before passing the award off to Cyrus.

6. Lizzo Performs in Front of an Inflatable Butt

In true Lizzo fashion, the singer took the stage to perform two of her hits — “Truth Hurts” and “Good As Hell” — in front of an inflatable butt. If that wasn’t enough, Lizzo took a momentary break while she was singing to chug from a bedazzled bottle of tequila.

7. Taylor Swift Gets Political During Her Acceptance Speech

Accepting the award for Video of the Year for her new song, “You Need to Calm Down,” the now-political Swift took the opportunity to highlight the petition seen at the end of her video for the Equality Act, stating it now has half a million signatures.