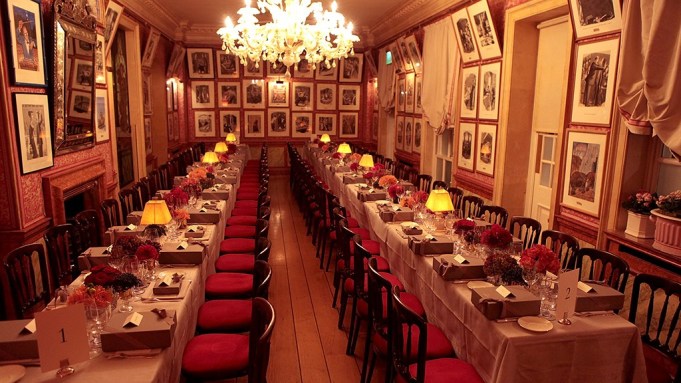 “They tried to get Kim Kardashian and Paris Hilton — but they’re stuck with me,” said the self-deprecating Jean Pigozzi, who cohosted a dinner in London on Wednesday night along with Mulberry and Charles Finch.

Pigozzi was talking about his upcoming collaboration with the accessories brand on men’s leather goods, which will bow in the spring. The collection will include belts — during the dinner Pigozzi also made reference to his generous waistline — and bags with prints on the inside. “We’re going to do some fun things,” he said.

Olga Kurylenko, Elizabeth McGovern, Dasha Zhukova, André Balazs, Marc Quinn, Charlotte Stockdale, Brooke Metcalfe and film director Michael Radford were among those sitting on long, skinny tables that ran the length of Harry’s Bar. The dinner was part of an ongoing collaboration between Mulberry and Finch on a series of projects spotlighting British creativity across film, art, theater and food. Frank Cohen, a prominent art collector with a gallery in London’s Bloomsbury, had some very incisive thoughts on the ongoing Frieze London fair, which draws to a close Saturday.

“The prices are too high!” he said, adding that works by dead and established artists on show at Frieze Masters look like bargains compared with their contemporary competitors. “The market is geared toward the youngsters; these young artists who are not quite developed are fetching more money than the older ones!”

He had some more thoughts still. “It’s like the Chelsea Flower Show, walking around with a glass of Champagne looking at a plant,” he said. “I would guess that about 1 percent are actually buyers.”