Rihanna may be the latest musician to get into the fashion world, but she isn’t the first. Here, a look at 14 musicians who have launched their own fashion brands.

The heyday of the celebrity fashion line is far from over.

The announcement of Rihanna’s Fenty fashion brand created with LVMH Moët Hennessy Louis Vuitton proves just that, garnering much hype on the Internet and gained more than 200,000 followers on Instagram since news of the brand was released on Friday — and without even one product being available to buy.

While highly anticipated, Rihanna’s brand isn’t the first celebrity fashion line. Celebrities — and musicians in particular — have a history of leveraging their star power and style icon statuses to create successful fashion brands, either self-launched or through licensing agreements.

Here, WWD looks at 14 musicians who have carved a place for themselves in the fashion industry. 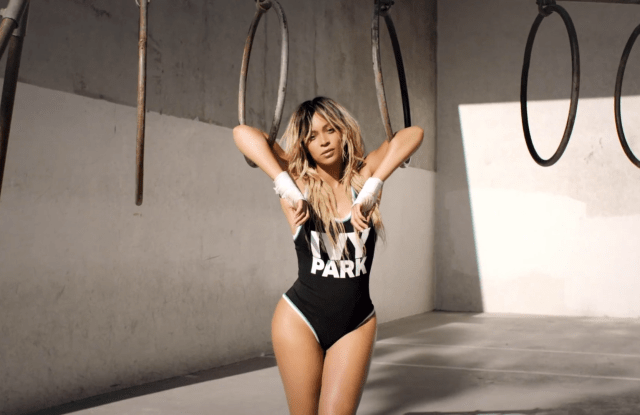 In the early Aughts, Beyoncé teamed with her mother, Tina Knowles, for a ready-to-wear label called House of Deréon, which paid homage to her grandmother. The singer wore one of the designs — a form-fitting black and gold gown — to the Academy Awards in 2009. Despite her star power, the singer ultimately shuttered the brand in 2012.

Undeterred, Beyoncé went on to successfully introduce activewear brand Ivy Park in 2016 in collaboration with Topshop’s Sir Philip Green. The line launched with 200 styles at 12 retailers — including Topshop, Net-a-porter and Selfridges — and in 50 countries. Following a series of sexual harassment allegations against Green, Beyoncé bought back the Topshop tycoon’s shares, giving her control of 100 percent of the brand. In April, the singer teamed with Adidas for an Ivy Park relaunch with footwear and clothing. Beyoncé still retains ownership of the line. 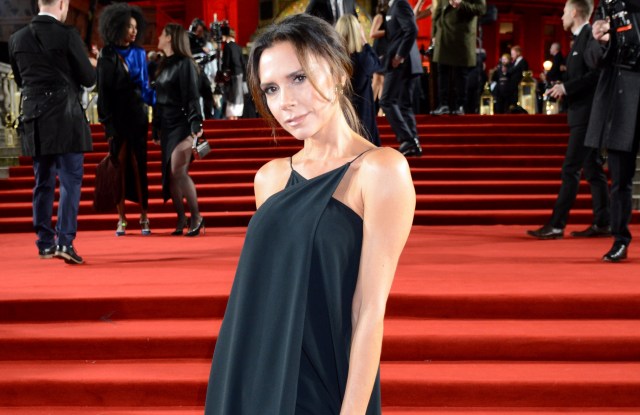 Victoria Beckham at the British Fashion Awards in 2018.  Richard Young/REX/Shutterstock

The former Spice Girls member proved she could turn her “Posh Spice” style status into a fashion brand, launching her namesake label in 2008 with a collection of tailored, feminine dresses. She has since expanded into handbags, eyewear and beauty products made in collaboration with Estée Lauder. She was a fixture at New York Fashion Week until September 2018, when she moved her runway show to London Fashion Week. 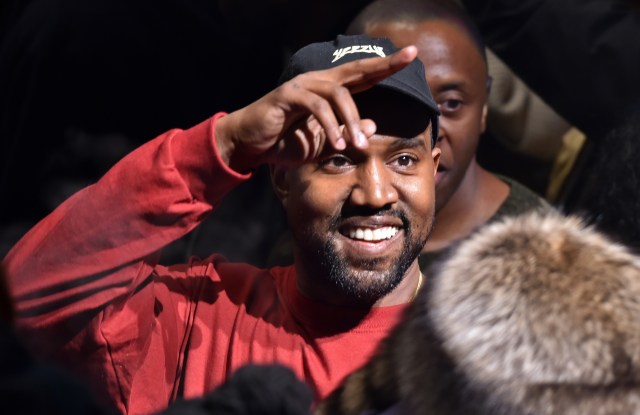 A divisive figure in fashion — and the rest of world — Kanye West launched his cult favorite Yeezy collaboration with Adidas in 2015 to much acclaim, showing his first collection at New York Fashion Week with a diverse cast of 50 models. The rapper’s sneakers in particular always drive shoppers into a frenzy, selling out immediately and going for thousands of dollars on resale web sites. West’s wife, Kim Kardashian, also routinely sports Yeezy looks created by her husband, which are frequently re-created by fast-fashion brands.

West’s most infamous Yeezy collection was Season 4, which received scathing reviews due to the fact that the rapper withheld logistical information on the show until the last minute, then held showgoers captive on Roosevelt Island in the scorching heat, causing a few models to collapse on the runway. 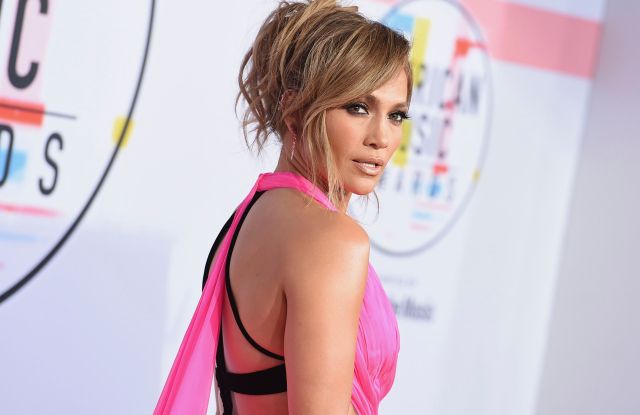 While other celebrities were starting fashion brands through licensing agreements, Jennifer Lopez flipped the switch and embarked on a joint venture with Andy Hilfiger, called Sweetface Fashion Co., which licenses brands. Through the corporation, Lopez launched J.Lo by Jennifer Lopez, a lifestyle brand that sold clothing, fragrances, jewelry and footwear, among others. The brand ceased operation in 2007.

Lopez then entered a licensing deal with Li & Fung’s U.S. division and launched a line of clothing made in collaboration with her then-husband Marc Anthony at Kohl’s. Following the couple’s split in 2014, the line was separated into two brands. Lopez’s line includes contemporary fashion, accessories and footwear and is still sold at Kohl’s. 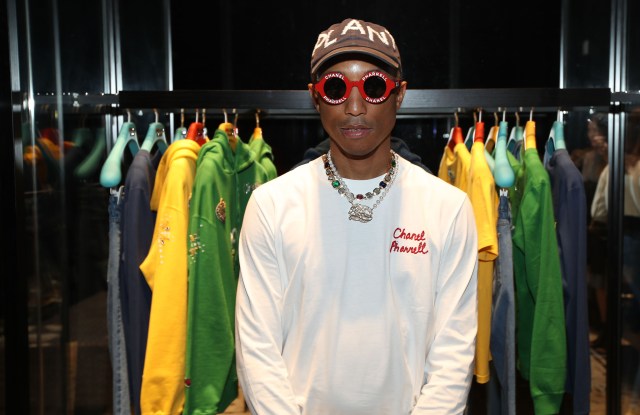 The multi-hyphenate is a formidable force in fashion. Williams first entered the fashion world in 2005 partnering with Japanese fashion designer Nigo to launch streetwear lines Billionaire Boys Club and Ice Cream, first made through a licensing agreement with Reebok. The brands then became partner companies to Nigo’s A Bathing Ape. In 2016, Williams bought back the 50 percent stake that Iconix Brands Group had in the brands.

Williams has also collaborated with a number of fashion brands, including Louis Vuitton, Moncler, Uniqlo, Chanel and Adidas. He has also received the Fashion Icon Award from the Council of Fashion Designers of America in 2015 and won Footwear News’ first Collaboration of the Year award for his collaboration with Timberland for the Bionic Yarn Bee Line x Timberland Honeycomb Boot. 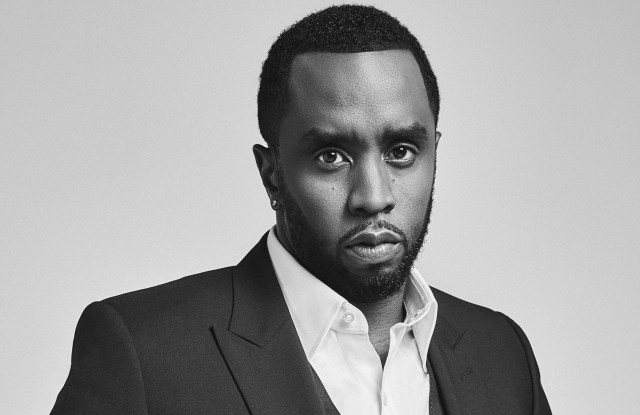 Diddy — neé Sean John Combs — launched his fashion empire in 1998 with a sportswear collection. Within two years he grew the Sean John brand to 1,200 Macy’s doors and had sales of $200 million. In 2004, he cemented his status as a designer by winning the Council of Fashion Designers of America men’s wear designer of the year award. After more than 20 years in business, the brand is still going strong and now operates under licensing agreements for its many products, including fragrances, clothing and watches. In 2016, Global Brands Group Holding Ltd. purchased a majority stake in the brand. 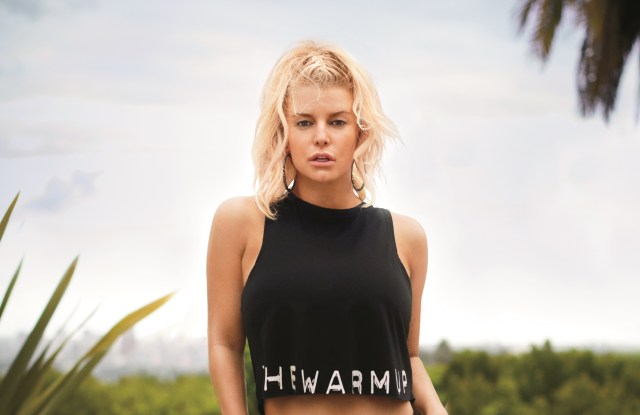 The singer ditched her music career for one in fashion in 2006 when she signed a licensing deal with JS Brand Management for a namesake fashion label. In just 10 years, Simpson’s label crossed the $1 billion mark and now includes 22 licenses for 31 product categories, including fragrance, footwear and activewear, among others. In 2015, the brand was acquired by Sequential Brands Group, which put plans in motion to expand the label’s wholesale business and e-commerce and mobile commerce platforms. 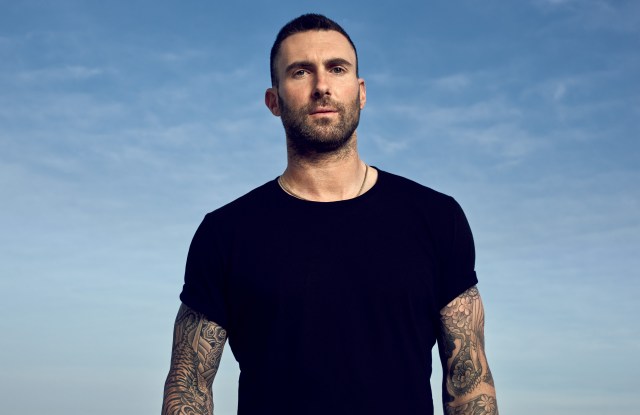 After dabbling in fashion design with his label 222, Adam Levine went on to strike a partnership with Sears Holdings to develop a men’s wear collection for Kmart in 2013. While he had intended to produce a higher-priced line with 222, the Maroon 5 frontman’s goal with the Kmart line was to produce for a wider audience. He’s since expanded the collection to also include women’s wear. 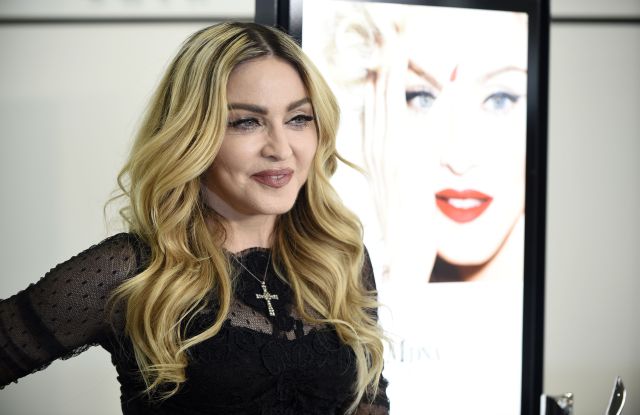 Madonna at a MDNA Skin Event in Japan in 2016.  Robichon/Epa/REX/Shutterstock

Madonna leveraged one of her most famous songs — Material Girl — for a fashion label she created with her daughter, Lourdes Leon. Launching at Macy’s as a venture between the singer’s MG Icon LLC and Iconix Brand Group in 2010, Madonna infused her own punk-rock style into the Eighties’ inspired juniors collection. The line has grown to include footwear, handbags and other accessories and has tapped celebrities such as Kelly Osbourne, Taylor Momsen, Rita Ora and Pia Mia as faces of the brand. 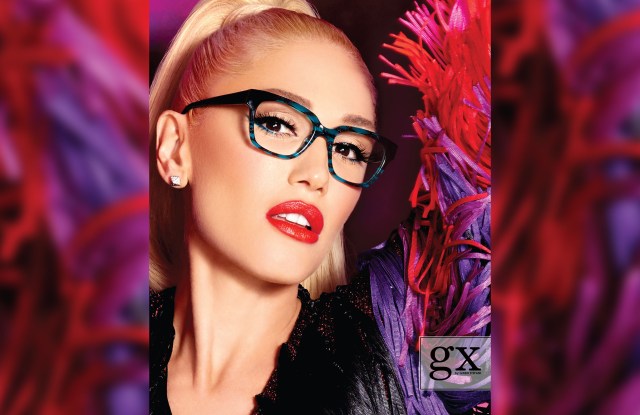 Former No Doubt frontwoman Gwen Stefani looked to her first solo album as a way to launch her contemporary fashion line. L.A.M.B. — the acronym for her album, “Love. Angel. Music. Baby.” — first launched as a handbag collaboration with LeSportsac. She then expanded to apparel with a runway debut in 2004 with a collection infused with Stefani’s signature punk style. She continued growing the line through license agreements, including a fragrance deal with Coty Inc. Stefani has since stepped away from designing apparel for the brand, but she recently created a collection of eyewear with Tura Inc. under the L.A.M.B. label. 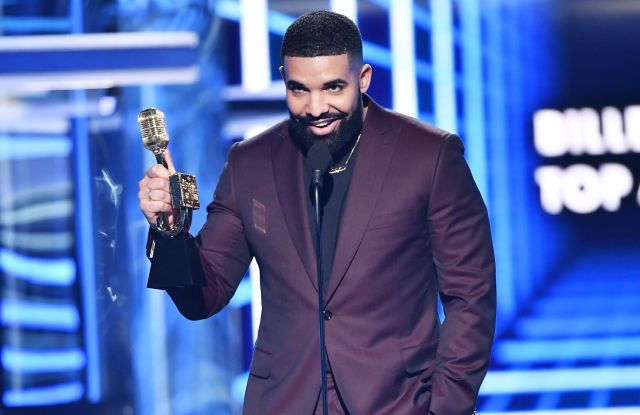 Drake at the Billboard Music Awards in 2019.  Rob Latour/REX/Shutterstock

Drake expanded his Canadian record label, October’s Very Own, to include a clothing line of the same name made in collaboration with Roots Canada in 2011. The brand has since embarked on a number of collaborations with companies including Nike, Canada Goose, Clarks and Alpha Industries. Drake has also expanded the brand into brick-and-mortar with locations in Toronto, New York, Los Angeles, Vancouver and London, among others. 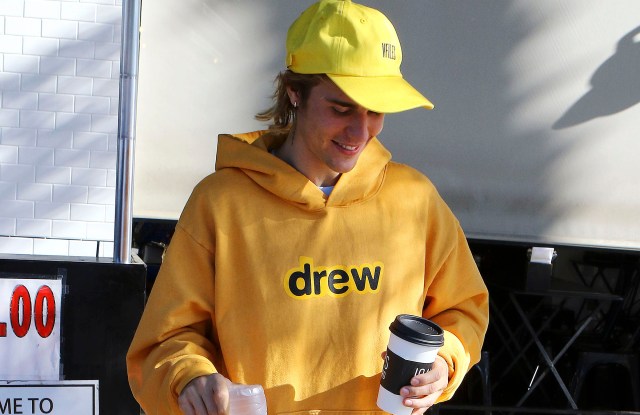 Taking a momentary break from the music world, Justin Bieber introduced his first fashion brand in January, called Drew House. The line, which mostly consists of beige, corduroy items or graphic T-shirts and sweaters with the brand’s smiley face logo, taps into the singer’s laid-back style. Bieber recently brought the brand to Hong Kong for a weekend pop-up shop during Art Basel. 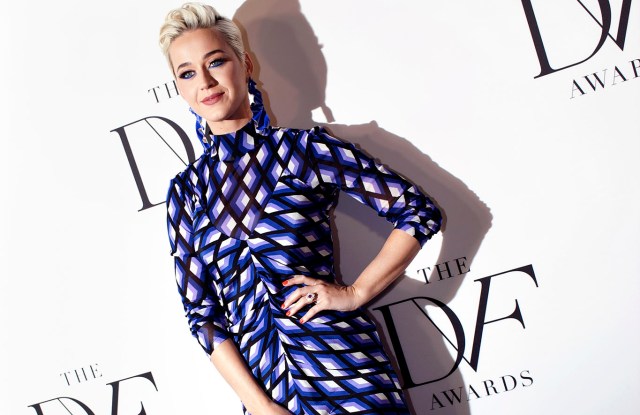 In 2016, Katy Perry brought her kitschy style to her namesake footwear collection. Made in a licensing partnership with Global Brands Group, the collection of sneakers, sandals and stilettos launched at department and specialty stores after debuting at FFANY New York. While she’s stated she’s interested in expanding her brand to accessories and apparel, the singer hasn’t had a smooth ride in the fashion world. In February, the singer had to pull shoes from her collection because of criticism that the style depicted blackface. 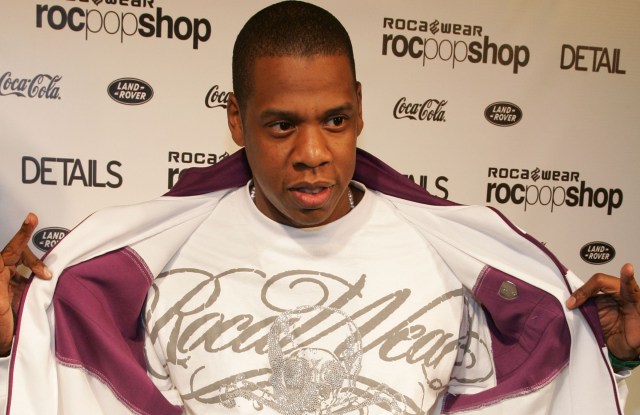 Among his many business ventures, Jay Z has also experienced success in the fashion world with his streetwear brand Rocawear. After starting the brand with record executive Damon Dash in 2006, the rapper sold it to Iconix Brand Group for $204 million the following year. The deal still allowed for Jay Z to oversee product development, marketing and licensing for the brand.

But the two haven’t had a totally amicable partnership. In 2017, Iconix Brand Group sued Jay Z and his Roc Nation entertainment company due to trademark infringement, claiming that the company has owned the trademark since acquiring the Rocawear brand. Last year, Jay Z expressed his disappointment over the arbitration panel that was overseeing the suit, stating the panel lacked diversity.

In another case filed last year, the rapper was served with a subpoena to comply with an investigation into Iconix’s financial reporting.

Fashion Icon to Designer: A Timeline of Rihanna’s Fashion Career