Kid Creole and the Coconuts played at the launch party Sunday night. 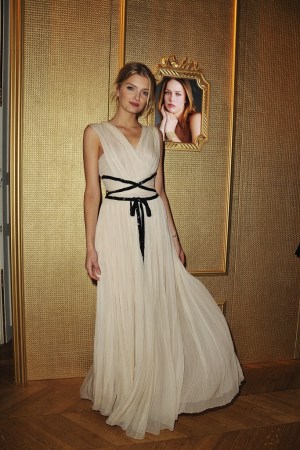 GEM OF A TIME: Eighties big band Kid Creole and the Coconuts whipped up a frenzy at the launch party for Dior Joaillerie’s latest fine jewelry collection — My Dior — on Sunday night at the Hôtel Salomon de Rothschild. The night’s hostess, Dior Joaillerie’s creative director Victoire de Castellane, said she booked the band as a nod to her old party haunt, legendary Eighties Paris nightclub Le Palace. It also seemed to spark good memories for Christian Louboutin and Farida Khelfa, who danced the night away. “She’s my sister,” said the designer, who has named a bag from his fall collection after Khelfa. Meanwhile, she is making a documentary about Louboutin.

Mingling in the jewelry display area, Stella Tennant — dressed in a Celine beaver fur coat — confessed she had never heard of the Coconuts. “I just gate-crashed the party. I’m just hanging out, spicing up my country life with a bit of Paris Fashion Week,” said the evergreen model, who walked in Celine and plans to make an appearance in the Chanel and Givenchy shows, too.

Also eyeing the jewelry designs, which were inspired by Dior’s iconic wicker motif, was Jamie Bochert. The model-cum-singer, who wore a vintage Jean Paul Gaultier dress, said she and her partner, Michael Pitt, will soon be premiering a music video they made together on Interview magazine’s Web site. “You see a girl and you see a boy, and they’re in Morocco in the desert and there’s some belly dancing,” she revealed. French comic actress Valérie Lemercier was entertaining friends by testing out the English accent she had to learn for her role as Miss Macintosh in “Astérix et Obélix: Au Service de Sa Majesté.”

“Natasha Fraser was my teacher. I had a cup of tea with Natasha and she taught me the really chic British accent,” said Lemercier, straining to control her speech.

Also in the crowd were Andie MacDowell’s daughters Rainey and Sarah Margaret Qualley, who have just modeled together in an Elle magazine shoot wearing Dior.