Erin O’Connor was among the guests at Harry’s Bar in Mayfair. 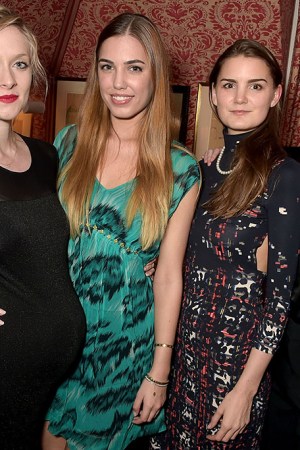 WOOING RUSSO: When shoe designer Francesco Russo set up his Paris atelier a year ago, the plan was to keep things small and simple with on one-on-one appointments and just one wholesale client, Bergdorf Goodman. There was no way he was going to get involved with e-commerce, fearing it would cannibalize the fledgling brand. That was until Justin O’Shea burst into his life last fall during Paris Fashion Week. The buying director of MyTheresa.com took one look at Russo’s shoes — on a colleague’s iPad — canceled his next appointment and asked his driver to find Russo.

It didn’t take long for the designer, whose 20-year career spans brands including Sergio Rossi, Yves Saint Laurent and Miu Miu, to fall for the charms of O’Shea, which is why MyTheresa has become the brand’s exclusive global online stockist.

Russo said he buckled because “MyTheresa started with a retail shop, and they have a strong relationship with the final customer. That convinced me to open the online door. I felt very secure with them. I also knew I had to face the reality of a world where online is erasing the traditional borders of retail.”

On Wednesday night MyTheresa held a small dinner in London in Russo’s honor, with guests including Erin O’Connor, Eugenie Niarchos and Amber Le Bon. Russo has more on his mind than retail, though. During dinner, he talked about his two beloved dachshunds, who live at his home in Lugano, Switzerland, and the reason why he plies his trade.

The son of a seamstress, the Puglia, Italy, native recalled his seven-year-old self sprawled on the floor of his mother’s workshop, watching women try on their dresses barefoot — and later with shoes on.

“As soon as they put the shoes on and started to move, they were like butterflies coming out of a cocoon,” said Russo. “As early as then, I knew I wanted to be a part of that process.”