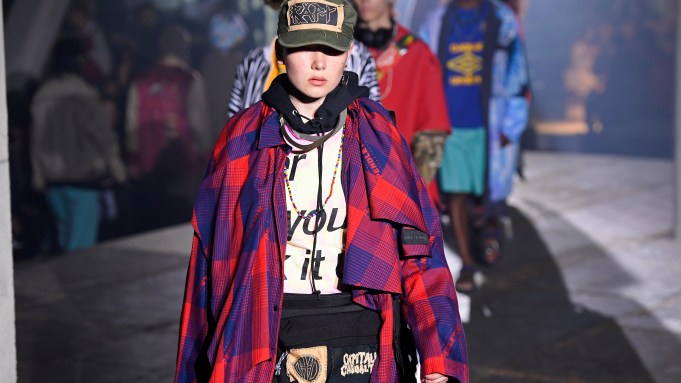 HOMECOMING: Daisuke Obana made a triumphant return to the runways of his home country Tuesday, with a large-scale fashion show held in a warehouse space. Supported by Amazon as a part of its At Tokyo program, the event was one of the best attended of Tokyo Fashion Week.

Not wanting to do a repeat of the show he staged in New York in July, Obana included only about a tenth of that collection, instead filling his lineup with a mix of new and old pieces. He said the reason behind this was a show a new side of himself.

“Each model was only wearing one or two items from my collection. The rest was reworked items made just for this show, as well as pieces from my own vintage collection,” he said. “And I mixed these things in to show a new way of styling [the collection].”

The inclusion of vintage pieces had a personal meaning for Obana.

“I worked for over 10 years as a buyer for a vintage clothing store, and that’s how I got my start in fashion. So it’s my roots and something I can never really separate myself from,” he said.

The location was also personal, as it was the first time in eight years the designer has shown in his home city. He said he was happy that his staff, many of whom have never been to one of his runway shows, were able to experience the ambience of such an event firsthand.