Nacho Figueras is adding another gig to his résumé: "connoisseur." 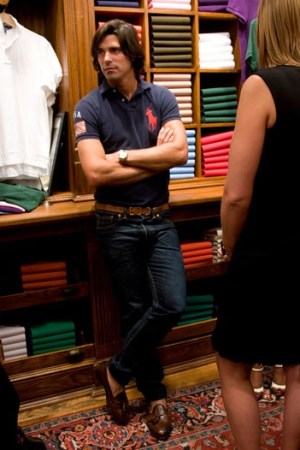 NACHO’S NEW PLAY: Nacho Figueras is adding another gig to his résumé. The professional polo player and Ralph Lauren spokesmodel has been appointed by St. Regis Hotels & Resorts as the brand’s first-ever “connoisseur.” While the title might sound a tad vague, a company rep said the hunky Argentine’s responsibilities will include competing in St. Regis-sponsored polo matches and overseeing its recently launched polo-focused Web site, stregispolo.com, which offers general information about the sport as well as listings for upcoming events. Polo is certainly an important area for St. Regis: The Astors, who founded the chain, were prominent figures at the matches held on Governors Island at the turn of the 20th century. Today, it continues to host polo events year-round, including the St. Regis International Cup.

SUMMER LOVING: If forecasts are to be believed, the weather gods are being kind to the CFDA Fashion Awards on Monday. This must be music to the ears of the event’s organizers, because this year will mark the debut of the Swarovski Terrace space outside of Alice Tully Hall, which will serve as the venue for the supper portion of the evening, and will be decorated with glitter boxes by Swarovski. Expect to see Alexa Chung and Ed Westwick, who will present the three Swarovski awards, on the terrace. Meanwhile, several scholarships will be unveiled that evening, including the $25,000 Geoffrey Beene Design Scholarship, which is going to Carmen Chen Wu of Parsons The New School for Design; the $25,000 Liz Claiborne Fashion Scholarship for Jusil Carroll of the Fashion Institute of Technology and the $25,000 CFDA/Teen Vogue Scholarship in partnership with Target, which Nicole Goh of Deer Park High School in Deer Park, N.Y., will receive.

Also at the awards, some fashion-industry types will be arriving in style since Jaguar is the event’s official automotive sponsor this year, and notables such as Nadja Swarovski, Caroline Kennedy, Isabella Rossellini, Tonne Goodman and Kim Hastreiter will be brought to the red carpet at Alice Tully Hall in the brand’s new XJ sedan. Jaguar also is having a featured moment in the short films on Accessory Designer of the Year nominees Alexis Bittar, Proenza Schouler’s Lazaro Hernandez and Jack McCollough and Marc Jacobs.

SALTER’S NEXT MOVE: James Salter is on the hunt again and has a $250 million war chest to put to work at Authentic Brands Group, where he serves as chairman, president and chief executive officer. The kitty includes funds from Leonard Green & Partners and Counsel Corp., as well as Salter. Authentic Brands, a brand-management firm, is eyeing iconic names in areas from apparel and action sports to entertainment and consumer electronics. Salter was previously ceo of Hilco Consumer Capital, which was part of the investor group that bought Ellen Tracy from Liz Claiborne Inc. in 2008.

CHLOE’S SUMMER SHARE: Add Chloé to the list of luxury retailers summering out east. The Compagnie Financière Richemont-owned house is the latest label to join the East Hampton, N.Y., fray, if only on a temporary basis. Chloé will open a pop-up shop from July 15 to Aug. 15 at 2 Main Street in the 1,600-square-foot lower level of the London Jewelers building. The store will feature Riviera-inspired styles from the ready-to-wear collection, as well items from pre-fall and fall runways. A selection of accessories, including the Paraty bag in exclusive colors, and pieces from the See by Chloé collection will round out the offer.

BRIAN’S SONG: It was surprising there were no major head-on collisions during a dinner Wednesday feting Brian Atwood hosted by InStyle managing editor Ariel Foxman and the CFDA at the Soho House in Los Angeles. Most of the guests, including Kristin Davis, Rachel Bilson, Rachel Zoe, Kristen Bell, Victoria Beckham, Anna Kendrick and Eva Longoria Parker, spent a good portion of the evening staring at each other’s feet in the designer’s heels. “I own every shoe Brian has ever made,” said Zoe, whose latest favorite is a thigh-high RZ boot she designed with Atwood, set for release this summer.

Bell remarked, “I like the clogs. I’m glad they came full circle.”

Atwood, who recently started working on a footwear collaboration with Beckham, has been busy finalizing a deal to help grow his brand and ensure he can keep celebrities — and laypeople — in his shoes. He wouldn’t divulge details but said the deal would allow his namesake brand to enter a variety of new categories. “For me, the sky is the limit if it keeps the integrity of the brand,” said Atwood. “Ralph Lauren started in ties and look what he has become.”