While many celebrities are keeping publicists in the dark about their New York Fashion Week plans, a few musicians are sure to be in the spotlight. 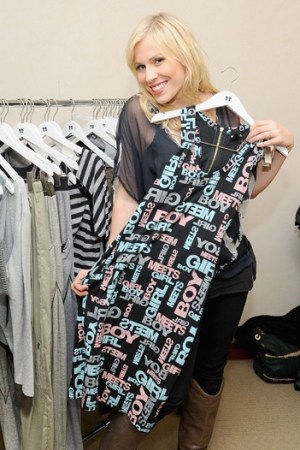 NAME THAT TUNE: While many commitment-phobe celebrities are keeping publicists in the dark about their New York Fashion Week plans, a few musicians are sure to be in the spotlight. Natasha Bedingfield will perform at Boy Meets Girl, Sean Lennon and Charlotte Kemp Muhl of The Ghost of a Saber Tooth Tiger will be live at Rebecca Minkoff, Sonic Boom’s Peter Kemper will do the honors at United Bamboo’s Saturday show, Kat DeLuna has signed up for Sachika and DJ Thom Bullock has mixed the music for Daryl Kerrigan and Josh Madden has done the same for EMU. Bedingfield, who will wear Reem Acra in tonight’s Red Dress runway show, is considering collaborating with Boy Meets Girl’s designer Stacy Igel.

Rachel Antonoff is taking the music-fashion combo one step further with “The Dance.” The designer has lined up The Like to keep guests entertained while models dance and drink punch in LaGuardia High School’s gymnasium.

ISAAC SAYS I DO: Isaac Mizrahi has cooked up a customized bridal collection for The Aisle New York that will be sold on the site’s first made-to-order boutique starting at the end of next month. Unlike the other wedding gowns and bridal sundries, which are sold in flash sales, the Isaac Mizrahi for The Aisle New York collection will be part of a six-month program. Shoppers at the members-only site will be able to choose from made-to-measure gowns or styles in sizes 0 to 14. Prices for his gowns will range from $2,200 to $4,500.

Mizrahi, who once sold wedding gowns through Target, has a reputation for bucking tradition in the bridal category. “The best place to shop for your wedding gown is the privacy of your own computer,” he said.

PLASTIC FANTASTIC: Mattel’s Barbie doll has long been lavished with attention from fashion designers, but this Fashion Week it’s Ken’s turn. Barbie’s erstwhile boyfriend — the plastic twosome officially broke up in 2004 after 43 years of bliss together — will be made over by six men’s wear designers to help celebrate his 50th birthday this year. Ken is getting date looks for different occasions from Spurr (formal date), Michael Bastian (picnic), Robert Geller (movie), Yigal Azrouël (beach), Nicholas K (rock concert) and Billy Reid (winter).

The promotion is a partnership between Mattel and the CFDA and coincides with a marketing campaign launched by the toy maker last month to determine whether Barbie and Ken will reunite after their years apart. The campaign includes billboards in New York and L.A., advertising in magazines like Us Weekly and a social-media presence on Facebook, Twitter and YouTube. Poll results will be revealed on Valentine’s Day — and so far results look good for a rekindling of the relationship.