The collaboration launched with a cocktail at Paris concept store Colette. 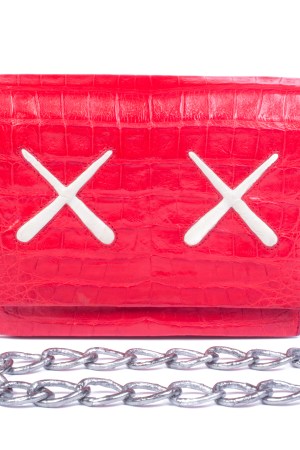 Everything to Know About Amazon Prime Day 2021

PAPA’S GOT A BRAND NEW BAG: Street artist Kaws, famed for his collaborations with brands including Uniqlo, Comme des Garçons and A Bathing Ape, has partnered with Colombian luxury leather goods firm Nancy Gonzalez on a series of bags featuring his signature crosses.

The collaboration launched with a cocktail party at Paris concept store Colette on Tuesday evening. Santiago Barberi Gonzalez, president and creative director of Nancy Gonzalez, said the two initially worked together in 2012, when Kaws designed a one-of-a-kind tote for a charity auction.

“I wanted to do a fun project, and I wanted to start doing very limited-edition art collections and he was the first person that came in my mind,” he said. “It’s like an exclamation mark reminding people what we really are.”

Gonzalez, an art collector, described Kaws — real name Brian Donnelly — as having impeccable taste. This turned out to be an important factor in the collaboration. “It’s very difficult to be colorful and have a sense of humor and be from Colombia and not be tacky, and remain so refined as our brand is. Kaws was great for that, because his work has a sense of humor and is colorful, but it’s so incredibly sophisticated,” Gonzalez noted.

The bags are available in a limited edition of 15 per style per color, with 13 references in total, he said. The include Leaf tote bags, Gio Crossbody bags and Gotham clutches in combinations of black, white, electric blue and red, among others.