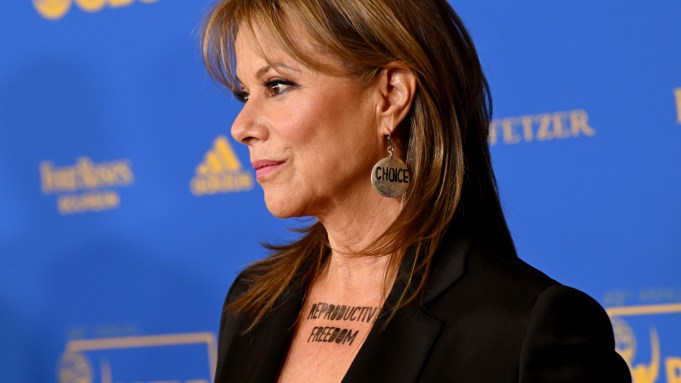 The 66-year-old actress, who was nominated for her supporting performance in “General Hospital,” wore a black pantsuit to the event featuring a tailored longline jacket and flared trousers. Grahn paired the understated look with simple black pointed stiletto heels. The all-black outfit acted as a blank canvas, drawing attention to Grahn’s accessories, which featured phrases supporting women’s reproductive healthcare and abortion access.

Grahn accessorized with a black handbag decorated with a panel of rhinestones, on which the actress placed black letter stickers spelling out “Bans Off Our Bodies.” Grahn also wore two round earrings spelling out “Pro” and “Choice,” respectively. She also wore a black stamp across her chest reading “Reproductive Freedom.” To finish off her politically mindful look, the actress wore several silicone band bracelets supporting various social and political causes, including Black Lives Matter and a Ukrainian LGBTQ rights organization.

The Daytime Emmy Award is an annual award show celebrating the best of American daytime television. The award show also includes the Daytime Creative Arts Emmy Awards under its umbrella, which are a class of Emmy Awards presented for daytime television production and technical achievement. Leading the television nominations are “The Young and the Restless” with 18 nods, followed closely by “General Hospital” with 17 nods. “The Kelly Clarkson Show” and “The View” each have nine nods, the highest of any talk shows nominated. The Daytime Emmys air on Friday, June 24.