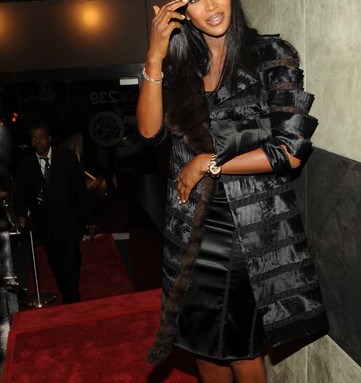 MINORITY REPORT: Naomi Campbell decried the dearth of minority models in the fashion world while receiving a Fashion Icon award at the annual Thurgood Marshall College Fund “Front Row” fund-raiser and fashion show at Roseland Ballroom in New York on Saturday evening. Introduced by modeling agent and Black Girls Coalition co-founder Bethann Hardison, Campbell called the situation an “injustice,” and said, “There is a small group of people whose minds we have to change because we are living in a multicultural society.”

Campbell, sheathed in Dolce & Gabbana and Dennis Basso, added she loves fashion and is fortunate to have worked in the business for 25 years, but she isn’t afraid to stir the pot on this issue. “Nelson Mandela always told me to speak my mind and the consequences will take care of themselves,” she noted, before leaving to board a plane for Moscow for a Russian Vogue project, with boyfriend Vladimir Doronin in tow.

Walker was accompanied by other members of Winfrey’s glam squad, including makeup artist Reggie Wells and stylist Luke Destin. “If it were left up to Oprah, she’d be in sweatpants and sneakers on a daily basis,” Destin told WWD. “But she trusts us. We have a look for her — conservative chic — and a group of go-to designers. These days, she loves Narciso Rodriguez, Valentino, Oscar de la Renta and Tory Burch.”

LIFE IS A CABARET: Bringing a taste of Nineties Los Angeles hot spot Les Deux Cafés to Paris for one night, Michèle Lamy and Rick Owens entertained more than 200 guests Friday with their Ain’t No Use Jiving bash at the underground Paris bistro Chez Françoise. Lamy figured among the night’s acts, reading snippets of poetry by Langston Hughes over live jazz to a boisterous crowd that included Jean-Charles de Castelbajac, Peter Dundas, Alexis Mabille, Kris Van Assche and Konstantin Kakanias. Lamy compared her style with the late Eartha Kitt. “I wouldn’t call it singing, exactly,” she purred, flashing her gold-plated teeth.

“I leave the singing to Michèle,” commented Owens, who looked on as a tattooed magician performed tricks assisted by a woman clutching a chicken.

Fellow onlooker, Dior Homme’s Van Assche, revealed a hobby of a less rock ’n’ roll kind: gardening. “It’s limited to my Paris balcony, of course,” he laughed, as a circus of oddball characters, including one prehistoric-looking, fur-clad gentleman, circled the room.

“She’s completely undressed,” gasped Dundas as creature of the night Christine Steinitz sashayed past guests flashing her breasts, dressed in a loose halterneck frock. Prior to the dinner, the likes of Leonor Scherrer explored a womblike installation by Lamy’s daughter, Scarlett Rouge, inside Owens’ colossal town house-atelier, located in Paris’ bourgeois 7th arrondissement.

TWEET ALL ABOUT IT: On holiday in Spain, Diane von Furstenberg was taken so to speak, but she had her wits about her to spread the word via Twitter. In a post Sunday, she wrote, “Madrid. I just got robbed in the street in front of the Thyssen museum.…My wallet, cash and all my credit cards!!” The designer could not be reached for comment Monday.

LIMITED GETS LENGTHENED: Turns out The Limited’s pop-up store at 134 Spring Street has some staying power — its brief run, from Oct. 14 to 17, has been extended to Dec. 28. “The results of the first four days encouraged us to extend the life span of the pop-up store,” said Linda Heasley, chairman and chief executive officer. The pop-up reintroduced the brand to New Yorkers, who haven’t had a Limited store in Manhattan since 1999. Bestsellers included infinity scarves in all colors as well as sweaters and a number of dramatic necklaces. The shop sold out of dog sweaters, graphic Ts, fake leather trapunto bomber jackets and several dress silhouettes. In addition to giftable items for the holidays, the store in December will preview items from the spring collection.

A GRAND IDEA: Parisian landmark Grand Palais — the venue for Chanel fashion shows and major antique and art fairs — has been chosen as the party spot to fete the much-awaited lingerie collaboration between Sonia Rykiel and H&M, WWD has learned. The one-off collection, which will go on sale Dec. 5 in 1,500 H&M stores worldwide as well as Rykiel boutiques, will be launched at a party on Dec. 1 in the glass-domed Art Nouveau hall.

BOTTOM’S UP: Not since the days of Henry Kissinger rolling into town from Harvard University has Washington gotten such a kick of adrenaline from the Cambridge establishment. Only this time, instead of ushering in a new world order, the Harvard campus served up a cadre of nearly naked, glitter-covered dancing boys from the American Repertory Theater. The occasion was the Harman Center for the Arts’ tribute, directed by Michael Kahn, to Shakespeare’s “A Midsummer Night’s Dream,” complete with cinema clips of a 15-year-old Mickey Rooney performing in Max Reinhardt’s 1935 movie version of the play, and Rooney himself, who, for a while, refused to cede the stage to award winner Sir Ian McKellen. Meanwhile, conductor Lorin Maazel, 79, stopped by to plug his summer music festival at Castleton Farms in rural Virginia before heading off to rescue the Boston Symphony Orchestra. “James Levine fell ill, and I’m on the next plane to Boston to help fill in,” said Maazel, who left the New York Philharmonic at the end of June and is now scheduled to return to the podium Oct. 30 to Nov. 7 to lead the Boston orchestra in Beethoven Symphonies Nos. 6, 7, 8 and 9, including performances of Beethoven’s Sixth and Seventh symphonies at Carnegie Hall in November. “The last thing I want to think about is the Beethoven Cycle. I’m supposed to be on vacation,” said Maazel, adding that from New York, he’s off to Europe to conduct London’s Philharmonia Orchestra and the Vienna Philharmonic.

FAMILY ACT: Demi Moore and Ashton Kutcher are set to make their debuts on the Great White Way together in “The 24 Hour Plays on Broadway” on Nov. 9 at the American Airlines Theatre. The married couple is slated to co-star with Jennifer Aniston, Eva Mendes, Rosario Dawson, Liev Schrieber, Emmy Rossum, Billy Crudup, Julia Stiles and Rosie Perez in the show, which is sponsored by Montblanc. In total, 24 actors, six writers, six directors and two musical guests will write, rehearse and perform six original plays in the span of 24 hours. One writer will be chosen from an online competition, also sponsored by Montblanc, at Talenthouse.com. The 24 Hour Plays concept was originated by Tina Fallon in 1995, and since then, several hundred short plays have been created and produced at festivals and theaters around the world. This latest Broadway version will benefit the Urban Arts Partnership.