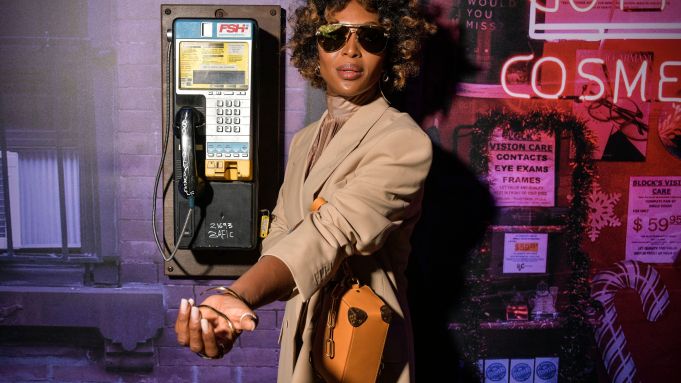 UNITED FRONT: Forget front rows, Virgil Abloh’s posse perched on the steps of a house on a fake street to take in the second Louis Vuitton men’s show by the designer. Guests included Timothée Chalamet, Skepta, Takashi Murakami, Natalia Vodianova and Naomi Campbell who debuted a new short curly do.

Several members of Abloh’s crew sported the single Michael Jackson-inspired white glove that served as the invite, while Kid Cudi was showing off a special customized blinged-out version encrusted with red, white and blue stones.

“He has a one-on-one Louis,” noted Offset who, with the help of his mom, was attempting to wedge a stack of diamond Elliot Avianne knuckledusters onto his glove.

Dressed in a “Louis V” purple mohair sweater with a diamond necklace, the rapper talked about the experience of walking in the Off-White show on Wednesday. “Fire,” he drawled. “It’s an honor to be looked upon as an influence of fashion and I feel great being here. It’s black excellence at its best.”

“Not me, I’m not tall enough,” quipped Don C when asked if he would like to do a turn. He’s in town presenting the fall 2019 collection of his Just Don line, “but it’s all about Virgil today, we’re here to celebrate Virgil and Louis take two,” he said.

Asked if there was competition among Abloh’s entourage to be cast in one of his shows, with South London rapper Octavian doing his second round on the Vuitton men’s runway this season, he replied: “Probably some of them, yes, but it’s all good. The ones who want to be in it, he’s going to let them in.”

“We’re not competing, we’re building,” said Ibn Jasper, Kanye West’s personal barber-turned-sneaker designer who has walked in a couple of Yeezy shows. He was wearing a Swarovski crystal-spotted sweatshirt by Jon Busce.

Commenting on the impact of the rapper community on the fashion world and new definitions of masculine style, he said: “I think it’s cool because we give the from-the-street perspective, like how it works in real life. It’s cool to be conceptual, but you’ve got to see how it actually works.”

Fear of God’s Jerry Lorenzo attributed the growing influence of Abloh and his peers to factors including the Internet and social media. “I think American culture has always influenced fashion, and it’s only becoming more and more [powerful] now that we have a platform and a voice,” he said.