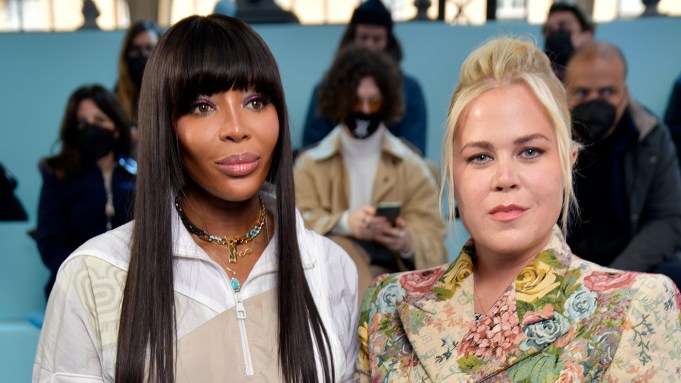 An inspiration. A mentor. A hard worker. A friend. A man who left a mark on hearts.

At Virgil Abloh’s final men’s wear collection for Louis Vuitton in Paris on Thursday, all those who crossed paths with him painted the portrait of a great designer, and an even better human being.

“Remember, post-Virgil, fashion is a way better place. In June 2018, it isn’t where it is today. He made it ’not exclusive,’ made it inclusive and showed everyone they could play…an active role,” said Don Crawley, with whom Abloh co-founded RSVP Gallery in 2009, adding that it was “hard to top [him] as a creative, but he’s even a better human being,” the kind of person who thought of others “even as he was fighting for his life.”

What Crawley would cherish the most about their friendship was “the many times we traveled the world together — we discovered the globe together.”

Plainly, they showed up for Abloh for all the times he had shown up for them.

Like Naomi Campbell, who arrived from Los Angeles the previous evening still reeling from another loss — the death of André Leon Talley — and who walked in Vuitton’s later “friends and family” show.

Abloh was “the greatest of all time,” for rapper Skepta; the one “who shifted fashion, even my daily life,” according to football player Victor Cruz; someone who pushed tennis star Venus Williams to “be better, to want more and to dream bigger.”

Big or small, he always had encouragements for others, a recurring theme of anecdotes.

“Something I never thought I’d do is skate around the Louis Vuitton office,” said Evan Mock, who remembered how Abloh had reassured him right before the skateboarder-turned-actor walked the fall 2019 show. “He told me to chill, [that] it would be fine — all your homies are here, it’s all good.…In the end, [I said], ‘I think I can remember how to walk.’ He replied ‘yeah, I think you can, too’.”

Sitting next to Japanese streetwear pioneer and new Kenzo artistic director Nigo, an emotional Kim Jones thought back to 2008, when they were both “with Kanye and Virgil, in a hotel room in the Grand Hyatt working on [West’s now-defunct label] Pastelle.”

When Abloh succeeded him at the helm of Louis Vuitton’s men’s wear, Jones thought him the “perfect person…culturally, design-wise, everything. He was brilliant.”

While everyone felt the need to be here for this final act, J Balvin firmly believed that “he’s going to be here forever,” thanks to the indelible mark Abloh left.

As night fell on the city, friends and family of the late designer filed into the Carreau du Temple for the second iteration of the show.

Luka Sabbat, who “never missed a Virgil show then, and wouldn’t miss one now,” was feeling the loss of his mentor. “He was my OG. He put me in a lot of rooms that put me in great situations,” he said, explaining that in the face of “a lot of negativity in the world, he never dove into it. If you came at him negative, he’d respond with positivity.”

Yasiin Bey, the American rapper previously known as Mos Def, opened the show by throwing paper planes. He later joined the finale, playing on a kalimba and singing as he walked, while Tyler, the Creator, slalomed on a bike.

Banks of light cast a glow on the rooftops of the set as Abloh’s family, including wife Shannon, children Grey and Lowe, mother Eunice and sister Edwina, were engulfed by well-wishers.

Although many wiped away tears, there were smiles and many fond memories.

The first thought that came to Charaf Tajer when thinking of Abloh was of “a party with everybody dancing, everybody smiling, happy,” like the night they met a decade ago at the club Tajer owned and where Abloh DJ’d one evening. “Virgil opened so many doors that we have to pay him homage not just this time, but all the time.”

As guests filed out into the Parisian night, Bey’s voice — the “Umi Says” track from his 1999 Mos Def album “Black on Both sides” — enjoining everyone to “shine a light on the world…shine your light for the world to see” felt like a final message from Abloh to go forth and practice as he’d done.