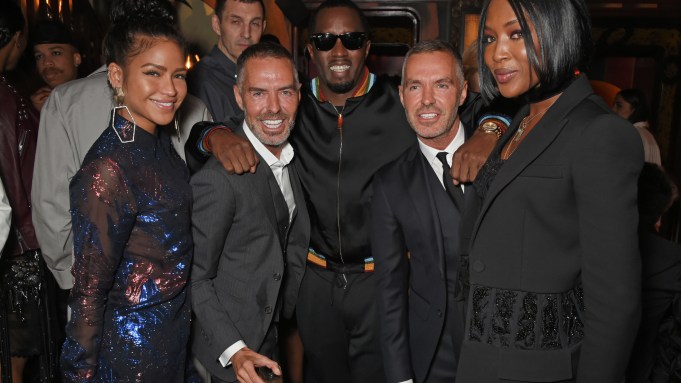 BAD BOY IN LONDON: Naomi Campbell joined her longtime friend Sean “Diddy” Combs at Mayfair’s Curzon cinema in London on Tuesday night to host a private screening of the soon-to-be-released documentary on the musician’s life.

The documentary, “Can’t Stop Won’t Stop,” marks the 20th anniversary of Combs’ record label Bad Boy and tracks its history through intimate archival and documentary footage that stretches as far back as 1993.

“He’s got an incredible archive and what you’re going to see tonight is only a touch of the archives that my brother has. I learn so much from him in the sense that he says ‘film everything you do,'” said Campbell, adding she has always turned to Diddy for advice.

“Yesterday, we were working and he was mentoring me, telling me how to model, how to pose, and he’s right because we should never get comfortable. That’s why I love Puff, he is someone who has made his mark in our world of people of color and in our future, and what we’re all trying to achieve.”

She said she was drawn to the rawness and humor of the film. “He has no idea how funny he is and it’s all just real and motivating.”

A realistic portrayal of his character was what Diddy was aiming for when he set out to produce “Can’t Stop, Won’t Stop” alongside first-time director Daniel Kaufman and Live Nations Productions.

“I just wanted the cameras to be dropped into my life, and I wanted to tell the truth. That’s what this movie is about,” said Diddy.

The film opens with footage from a past interview with the rapper, where he sets out to dispel the myths around his public persona. “The media portray me as a gangster, as a cold individual. My name is Sean Combs, I’m a young black man and I just had a dream to be successful in life,” he says.

It goes on to track his success, blending humorous and more private, sensitive moments. The film shows how he learns to be an executive, how he manages his temper in business meetings and how he deals with the death of his close friend Biggie Smalls, whose real name is Christopher George Wallace. There’s also a scene showing him bringing his friends and collaborators together for a concert that would mark his 44th birthday.

The rapper said he was initially inspired by “Truth or Dare,” the documentary on Madonna’s life. “I wanted to do a movie like Madonna’s, something raw and honest, but it turned into something much bigger than that. I wanted the audience to get an inside look into what happened when the Bad Boy family reunited, the ups the downs, the joy, the real 20th anniversary. Not only the making of the concerts, but the story of how we started Bad Boy.”

The film, which debuted at this year’s Tribeca Film Festival in New York, will be released on Apple Music on June 25.