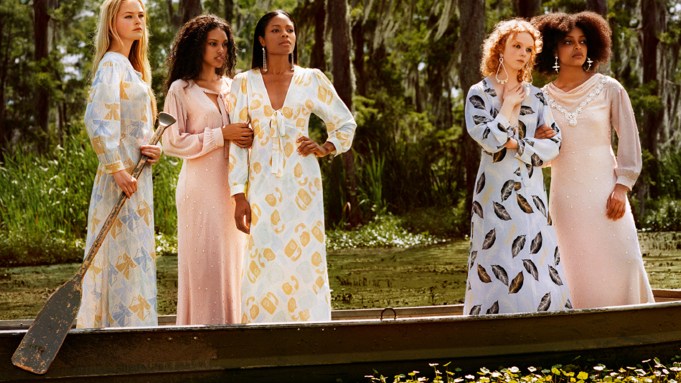 Miu Miu’s campaigns have been as cheery, colorful and conceptual as the collections in recent seasons, featuring an assemblage of actresses and models across age ranges in eclectic locations. There was Elle Fanning, Carolyn Murphy, Karen Elson and Lara Stone at the beach and underwater for the day-at-the-beach spring 2017 campaign, and Jaime King and models Samantha Archibald, Iesha Hodges and Lily Nova playing in a London hotel room for pre-fall 2017.

In his fifth campaign for the house, Alasdair McLellan shot the models amid the unique, suspended-in-time glamour of New Orleans across locations ranging from the bayou to the Preservation Hall. He composed the campaign from collages of black-and-white and saturated color images for a contrast of the old-fashioned and modern. The models are shot outdoors in giant, colorful faux-fur coats, hats and boots; in a jazz hall decked in drop-waist dresses and crystal jazz age headpieces, and in a boat on the bayou in light pastel and printed dresses.

Katie Grand styled the campaign, with hair by Anthony Turner and makeup by Dianne Kendall. The campaign will launch in August issues of Vogue Paris and Vogue Russia, as well as international editions of Elle, and Harper’s Bazaar and W.