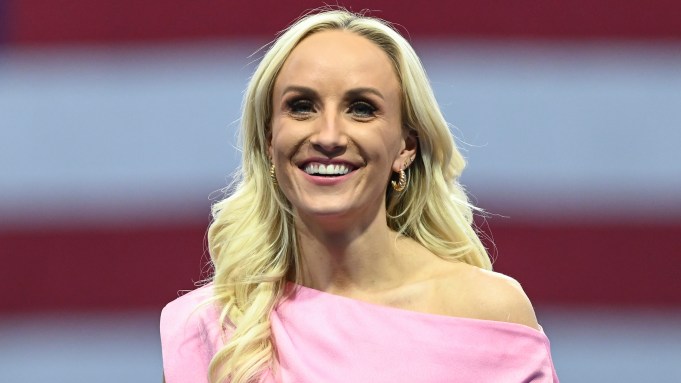 Olympic gymnast Nastia Liukin may not be competing in the Tokyo Summer Olympics, but her colorful style has been stealing the spotlight as she provides commentary for the sport.

Liukin — who won five Olympic medals in gymnastics at the 2008 Beijing Games, including gold in the all-around competition — has made an impact on Olympics viewers with her colorful, monochromatic style in bright hues of purple, blue, orange and pink.

“Everything is thought out, really symbolic and very detailed regarding the colors that she’s wearing,” said Liukin’s fashion stylist, Gabriela Tena, who spoke to WWD from Spain. “We try to do a different color for each look so it’s not all the same color and it’s like a color storyboard almost.”

Tena explained that many of Liukin’s colorful looks have a meaning behind them. For Liukin’s first day providing gymnastics commentary for NBC, for example, the Olympic gymnast paid homage to the late Kobe Bryant and his daughter Gigi with her purple Safiyaa pants and matching purple Tom Ford heels that she paired with a white, ruffled Zimmermann top.

“He was a big mentor to her and they met at the 2008 Olympics,” Tena explained. “She wore purple to honor Kobe and Gigi.”

There was also symbolism in the red Dior dress Liukin wore during the women’s gymnastics team competition on July 27. Tena explained Liukin chose to wear red to represent all eight nations competing in the event, as each country’s flag features the hue.

For Thursday’s women’s all-around gymnastics competition, Tena stated that Liukin has plans to wear a pink Safiyaa jumpsuit, which will give a nod to the pink leotard she wore at the 2008 Summer Olympics when she won the all-around competition herself.

Tena, who has styled Liukin for the last two-and-a-half years, stated she is aiming for a “sporty chic” vibe when styling Liukin’s Tokyo Olympics looks. Her strategy to achieve this has been pairing feminine styes with more casual pieces, such as a light blue Azeeza baby-doll dress with matching Nike Air Jordans or a satin Veronica Beard blazer jacket and matching white Alice + Olivia shorts paired with sculptural sage green The Attico heels.

Due to COVID-19 restrictions at the Olympic Games, Tena couldn’t travel with Liukin to Tokyo like she would for other events. Instead, Tena traveled to Liukin’s home in Dallas prior to the Olympics and helped her choose every outfit and pack everything so she would be organized in Tokyo.

“I talk to her every day. I haven’t FaceTimed her, but we always send photos back and forth,” Tena said about her interactions with Liukin during the Olympics. “She doesn’t have a second to FaceTime. I just got off the phone with her and I don’t think she’s slept in 48 hours.”

As more men’s and women’s gymnastics events are scheduled for the remainder of the Tokyo Olympics, it’s expected that Liukin will continue to make an impression on viewers with more of her colorful looks.

Click through the above gallery to see more of Nastia Liukin’s Tokyo Olympics style.

A Closer Look at the Tokyo Summer Olympics Uniform Controversies