The Russian model and philanthropist was at the launch of the special campaign marking the house's 70th anniversary. 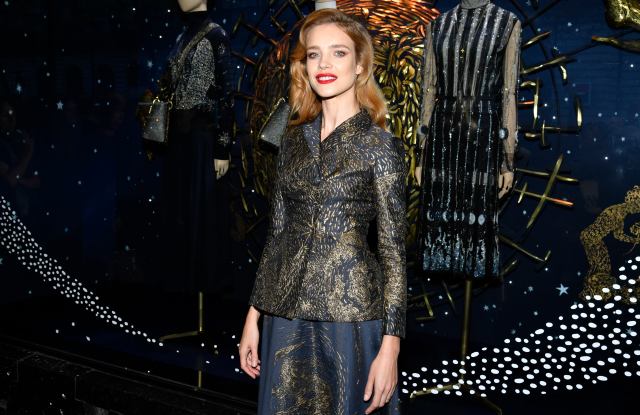 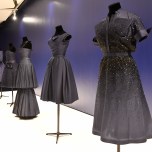 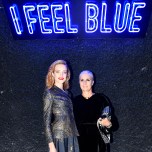 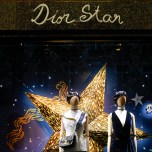 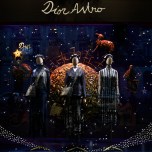 Dior has taken over 11 windows at the retailer’s Paris flagship on Boulevard Haussmann until Oct. 10. In celebration of creative director Maria Grazia Chiuri’s blue-themed fall collection for the house, the store is offering 23 exclusive products at a pop-up space on the ground floor.

The event coincides with Paris Fashion Week, which is scheduled to run from Sept. 25 to Oct. 3.

Pausing to admire the hot-air balloon hovering under the flagship’s landmark cupola, attendees including Philippe Houzé, executive chairman of Galeries Lafayette Group, and Nicolas Houzé, ceo of its department store division, headed to the Galerie des Galeries exhibition space to take in a show of 12 original designs by Dior, titled “I Feel Blue,” which stuck to the navy palette.

Chiuri admitted the teams at Dior were initially surprised by her decision to showcase a single hue this season. “They asked, ‘Are you sure?’” she recalled. “I think that you have to do what you really think is the right thing in your vision. If you do something in an honest way for yourself, other people appreciate it.”

She noted the astrology-themed products, which include scented candles and a limited-edition silk scarf, allowed customers to feel a more personal connection to the brand. “People love something playful. Sometimes fashion gives an idea that it’s only serious things. Fashion is also something to enjoy and to share with other people,” said Chiuri, who is an Aquarius, “like Mr Dior.”

Toledano wanted to stage a major retail event in Paris to coincide with the Dior retrospective at Les Arts Décoratifs, which he said was on track to surpass 600,000 visitors by the end of its run on Jan. 7, in what would be a record for the museum.

Though not superstitious, the executive — who studied math and engineering — is a great believer in the power of numbers, noting that the Lady Dior handbag, launched in 1995, owes its ongoing success in part to its ideal proportions.

“I believe in the golden number. People who are into maths all have a form of superstition about numbers. I think there is a kind of underlying law of probability and I adore that — I think it lends a poetry to what we do that goes beyond the rational,” he said.

“Superstition is believing in the precise moment when the stars align, and that requires a lot of energy, not just relying on a crystal ball. You have to mobilize everyone’s energies, and great designers know how to do that,” Toledano added.

Guillaume Houzé, director of image and patronage at Galeries Lafayette, said the store hoped to benefit from the buzz surrounding the Dior show at Les Arts Décoratifs. “I think the success of the exhibition is richly deserved, so obviously we will bask in it too,” he said.

He noted that blue was a historic color for the house of Dior, whose founder’s voice can be heard on the soundtrack for the Galeries Lafayette exhibition.

“Our role and the role of brands is to tell stories. This is a magical, fairy-like story, and that is what fascinates us and what the customers are clamoring for also. I think Maria Grazia’s choice is extremely bold and reflects the new dynamic being put into place at Dior,” said Houzé.

The “I Feel Blue” exhibition at Galeries Lafayette.  Dominique Maître