The Russian model launched a capsule shoe collection on the site to support children with special needs. 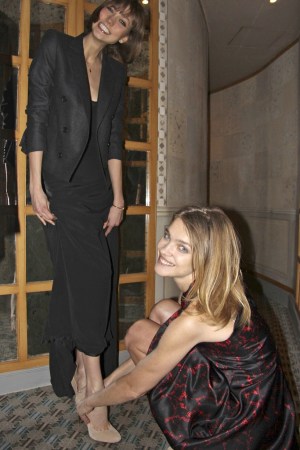 OF SHOES AND CAVIAR: “Potato or blini,” said the waiter with a thick Russian accent, as he bent over to offer a plate of caviar. “No, have more, have more — there’s lots of it,” he encouraged, while model Natalia Vodianova gave out boxes of beige pumps to her guests at the backroom of Paris’ chic Russian dining spot Caviar Kaspia.

The model was hosting the launch party for her limited-edition shoe collection there Friday night, which Net-a-porter agreed to sell for her charitable cause. “This is the second capsule collection that I’m doing in collaboration with Centro, which is like a Russian H&M, but only for accessories — and all the profits are going to my Naked Heart Foundation,” Vodianova stated.

The shoes retail for 70 pounds, or $105 at current exchange, on Net-a-porter, but cost $35 in Centro’s 280 sales points throughout Russia, in order to be more affordable in a country where “70 pounds is serious money,” the model explained. “Plus, we didn’t want to scare [those] people off who are expecting a high price [at Net-a-porter]. They would never buy, thinking the shoes will fall apart, but I wear them all the time; they are tireless.”

Endorsement comes from high up the echelons of retail. “I can confirm that they are comfortable and very pretty, actually. I just can’t believe there are so many women wearing my shoes tonight,” said Natalie Massenet, the stylish founder of Net-a-porter, about the site’s exclusive model in nude. “[It’s] leg-lengthening.”

As party guests, including Karlie Kloss and Ulyana Sergeenko, kept popping in, Vodianova knelt happily before them, helping each to slip into the beige pumps she was giving away in abundance. “I call them my fairytale shoes, because they stand for a fairytale coming true,” she explained, as Mario Testino — who already helped the model raise 450,000 euros, or $585,975 at current exchange for her foundation — Christian Louboutin, Christopher Kane and Roland Mouret watched the fairy godmother in action.

This year, thanks to Vodianova’s “Play With Purpose” program, the 100th playground will see the light of day in Russia, while the foundation’s second project, “Every Child Deserves a Family,” is barreling full-speed ahead. “I know first hand how hard it is for a family to support a child with special needs,” revealed the mannequin, who helped raise her disabled sister under difficult circumstances. “They are mostly left to government care, but the care is so poor, they don’t live very long. So we support those families, organize camps and holidays, so they can rest.”

Corporate philanthropy is not very well developed in Russia, deplored the hostess looking radiant in a printed Louis Vuitton cocktail dress and praising Centro for being “the first socially responsible fashion brand in Russia that is giving back.”

It looks like Vodianova is as tireless as her fairytale pumps. On Sunday the model is running the half marathon to raise even more funds for her foundation, then will rush off to Givenchy to walk the runway show.

“And I haven’t even trained. I’ll try not to get a heart attack,” she said, adding: “[Fortunately] I never get sick. I have my strong Russian genes protecting me.”

Vodianova showed off a well-defined pair of biceps, but then knocked on wood anyway. “Just in case,” she quipped.

For the party’s finale the model commanded a group picture. “All the girls who are wearing the shoes — over here!” she shouted. As the Cinderellas were gathering to put their nude pump forward, Vodianova directed: “And now say shoooooees.”