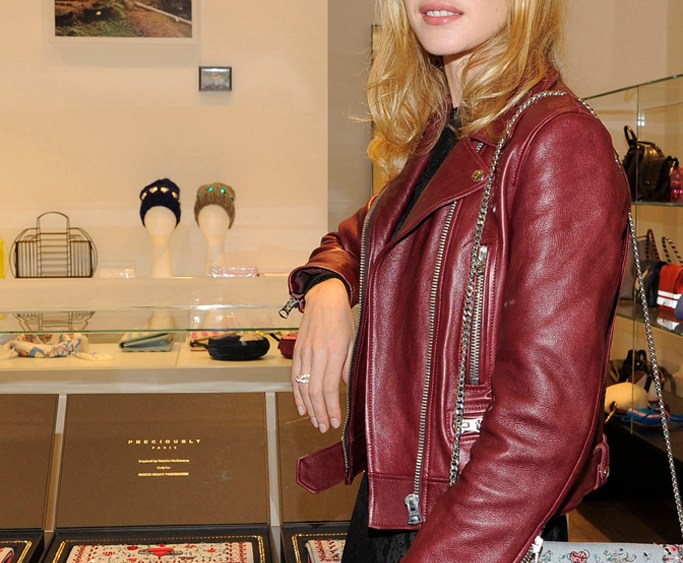 The model teamed up with Carole Tessier, founder of Preciously Paris, a Paris-based brand specializing in hand-embroidered jeans, bags and accessories set with precious and semi-precious stones, to design a handbag for the Naked Heart Foundation. The proceeds from the edition of 200 pieces will benefit the model’s children’s charity.

“Everything at Preciously is about the beautiful and delicate embroidery. My grandmother embroidered. She taught me how,” Vodianova, who matched the handbag with a black Givenchy dress and a burgundy leather jacket from Acne, said at the launch event at Colette in Paris on Thursday.

“It had to have lots of hearts in it,” Vodianova said of the pattern on the handbag, which was reminiscent of traditional Russian motifs. “I guess [the] heart is quite folkloric, but it’s very Naked Heart-ish.”

Tessier said each bag required 25 hours of work in Paris ateliers. “The handbag can be as rock ‘n’ roll for daytime as elegant at night,” she noted. Priced at 2,650 euros, or $2,850 at current exchange, it is available exclusively at Colette in Paris. It will go on sale at Le Bon Marché in Paris, Web site Nine in the Mirror and on www.preciouslyparis.com from Nov. 23.

Vodianova said the next big event for the foundation will take place in London on Feb. 20. “Last year I cohosted it with my friend Karlie Kloss. She has yet to confirm for this year. It would be hard to replace such a wonderful host as Karlie,” she said.

In the meantime, the mother-of-four is mulling Christmas gifts for her kids, including one-year-old Maxime. “He wants a Hoover for the holidays. He loves to Hoover,” she said with a smile.