By Joelle Diderich and Miles Socha on July 4, 2016
View Slideshow 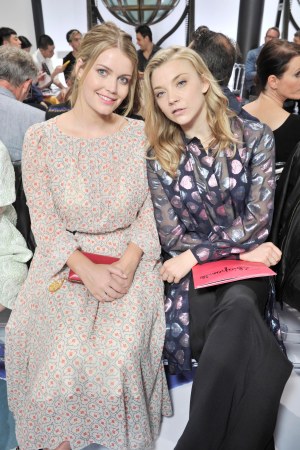 ACTORS’ GUILD: “Is it an art installation?” Natalie Dormer asked at the Schiaparelli show, referring to the golden wheat that Chanel planted on Place Vendôme, where Schiaparelli is located. “Paris is a perfect canvas for it.”

The “Game of Thrones” star is about to begin pre-production on the psychological revenge thriller “In Darkness,” which she cowrote with her fiancé Anthony Byrne, who is also set to direct.

Carmichael can’t seem to escape period costumes. The British actress will star opposite Rosamund Pike and David Oyelowo in “A United Kingdom,” the story of the real-life romance between Ruth Williams and Prince Seretse Khama of Botswana.

“I’m nearing my way toward present-day. It’s set in the Forties this time, and it’s another glamorous sister,” the “Downton Abbey” star said with a smile. “It’s kind of one of these stories that has everything. It’s a love story, and it’s a true story, and you sort of can’t believe that it did in fact all happen.”

Marina Hands was full of praise for Tom Hardy, her costar in the upcoming miniseries “Taboo,” set to premiere on BBC One and FX next year. “I have never worked with anyone like him. He’s a genius,” she said. “He has amazing instinct. He is very powerful, but very subtle at the same time. He’s a pure actor.”

Héloïse Letissier, aka Christine and the Queens, will play the Latitude festival in England this month and has some U.S. gigs lined up in the fall. “After that, I will disappear and write the second album,” she said. “I love the idea of a comeback, but in order to come back, you have to go away. It works better that way.”