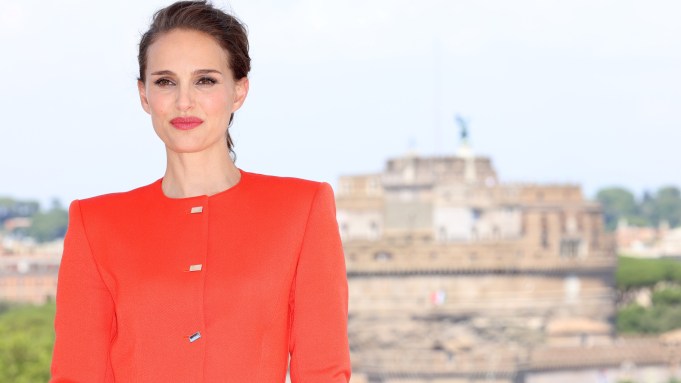 Natalie Portman is continuing her streak of fashion-forward outfits for her newest movie.

On Thursday, the award-winning actress wore a coral skirt suit for a photo-call for her latest movie, “Thor: Love and Thunder,” at the Villa Agrippina Gran Meliá Hotel in Rome. She wore her hair in a bun with the top slightly teased, strappy silver heels by Pīferi and a coral lip to match.

She is usually styled by Ryan Hastings.

For the world premiere of the film in Los Angeles, the actress wore a glittering rose embroidered pink draped dress by Celine. She paired the look with heels from Jimmy Choo and jewelry by Anita Ko.

Earlier this week, Portman and her “Thor” costar Tessa Thompson both paid homage to the cult ‘90s movie “Clueless,” which featured Alicia Silverstone and Stacey Dash, where the two stars wore outfits inspired by Silverstone and Dash’s characters Cher and Dionne.

Portman wore a bright yellow plaid skirt and jacket from Dior’s pre-fall 2022 collection. She has been a longtime ambassador for the French luxury brand.

“Thor: Love and Thunder” marks Portman’s return to the franchise, reprising her role as Jane Foster, who turns into the female version of Thor. Her last appearance in the Marvel Cinematic Universe was in the 2013 movie “Thor: The Dark World.”

The movie, which is directed by Taika Waititi, will premiere in theaters Friday.

PHOTOS: The Costumes in ‘Thor: Love and Thunder’