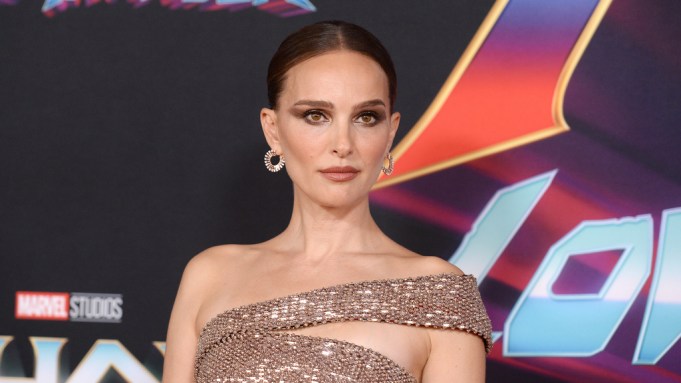 Natalie Portman made her return to the Marvel Cinematic Universe in style.

On Thursday, the actress attended the world premiere of her latest movie “Thor: Love and Thunder” wearing a glittering rose embroidered pink draped couture dress by Celine. She paired the look with heels from Jimmy Choo and jewelry by Anita Ko.

She wore her hair in a bun with dramatic eye makeup that seemed inspired by her hit 2010 thriller “Black Swan.” Portman is usually styled by Ryan Hastings.

Among those who also attended the premiere, which was held at the El Capitan Theatre in Los Angeles, were Chris Hemsworth, Tessa Thompson, Christian Bale, Taika Waititi, Jaimie Alexander, Chris Pratt, Karen Gillan and more.

Thompson, who plays Valkyrie in the franchise, wore a custom strapless Armani Privé gown that featured a cutout on one side. She also styled her hair in an updo and wore heels by Stuart Weitzman.

“Thor: Love and Thunder” marks Portman’s return to the franchise, reprising her role as Jane Foster, who turns into the female version of Thor. Her last appearance in the Marvel Cinematic Universe was in the 2013 movie “Thor: The Dark World.”

The film, which is directed by Waititi, will premiere in theaters starting July 8.