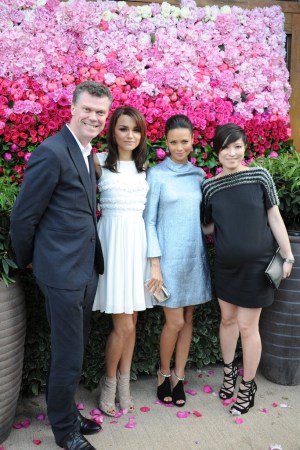 NATURAL INSTINCTS: “I was leafing through a big book of Helmut Newton shoots for general inspiration,” said Sandra Choi, Jimmy Choo’s creative director. “And I came across a picture of a couple getting busy in some greenery, and thought ‘Yes! That’s it.’”

Inside the dining room, Jasmine Guinness and Newton were deep in a philosophical discussion about shoes. Comparing heel heights, Newton — who was wearing Jimmy Choos with a 120-mm. heel — said: “You know, men never actually look at your shoes. They look at the top third of you, here and here,” as she gestured illustratively. “Well, not unless they’re foot fetishists,” countered Guinness. “In that case, that’s the only thing they look at,” she added.