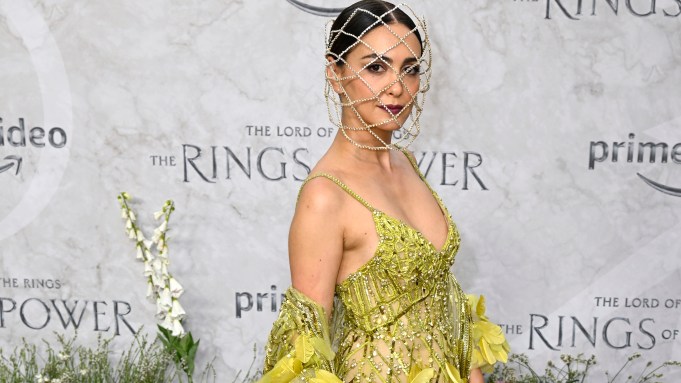 Nazanin Boniadi made a fashion statement at the latest premiere of “The Lord of the Rings: The Rings of Power” premiere in London.

On Tuesday, the British actress wore an embellished lime minidress with a matching draped coat and crystal headpiece by Elie Saab from the label’s spring 2022 couture collection. She wore her hair up in a bun and her makeup simple with a dark magenta lip.

She was styled by Erin Walsh, who also works with the likes of Anne Hathaway, Ashley Park and Alison Brie.

Boniadi is part of the main cast of the upcoming Prime Video series, which is a prequel to the blockbuster trilogies of “The Lord of the Rings” and “The Hobbit,” both of which are based on J.R.R. Tolkien’s books of the same name. The two were adapted into popular movies directed by Peter Jackson, accruing billions of dollars in total box-office revenue.

The actress has been tapped to play Bronwyn in the show, which is set thousands of years before the events of “The Lord of the Rings” and “The Hobbit,” the latter of which is already a prequel to the former.

Bronwyn is a human healer and mother who owns an apothecary in the Southlands. She shares a forbidden love with Arondir, a Silvan Elf, which is similar to Tolkien’s love tales about characters such as Arwen and Aragorn from “The Lord of the Rings.”

Prime Video’s “The Lord of the Rings: The Rings of Power” premieres on Friday, with the first season consisting of eight episodes.