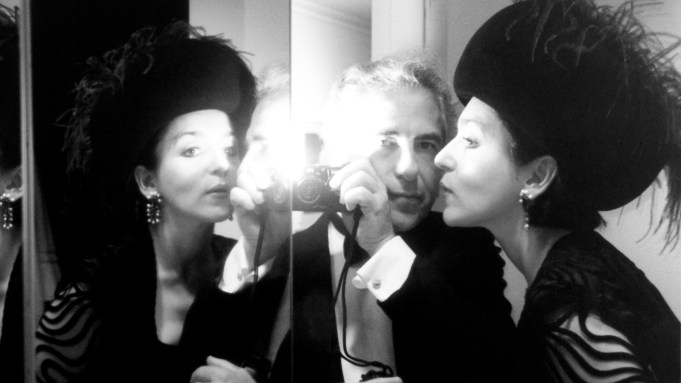 Neiman Marcus has enlisted photographer Gideon Lewin and his life partner Joanna Mastroianni for a double-barreled event Thursday at its Dallas flagship.

Lewin will be signing copies of his new book “Avedon: Behind the Scenes 1964-1980” and Mastroianni will be debut her Avedon-inspired spring collection at a trunk show. The luxury retailer’s chief executive officer Geoffroy van Raemdonck will host the affair. Similar events are planned for Dec. 5 and Dec. 6 at Neiman’s Marcus’ San Francisco outpost and for Dec. 10 and Dec. 11 in Palm Beach.

Having started his career as a studio assistant to Avedon and later graduated to manager, Lewin traveled with the photographer for various editorial assignments and museum exhibitions. There are shots of Avedon at work with Raquel Welch on location in Baja in 1974 and Avedon with a portrait of his father Jacob Israel Avedon in 1974. Lewin said Tuesday, “I was on call 24 hours a day. But I did have the freedom to work with my own clients — sometimes at night, sometimes on the weekend. When he wasn’t working, I was working. That was our agreement.”

Widely recognized for his portraits and fashion photography, Avedon was “intense, a workaholic, totally dedicated to his photography — working 24 hours a day basically.” Lewin said the book is about “the human being — the lighter side of him.” Numerous images show an eagle-eyed Avedon on set, but there are also more relaxed moments caught on film such as Avedon jumping for joy in Japan. Others include he and Lauren Hutton walking arm in arm on the beach at Fire Island and Avedon dancing with China Machado at an after party in Paris in 1965. Opposite the table of contents is a shot of Avedon and Lewin shaking hands after hanging the last print for Avedon’s 1978 exhibition at Metropolitan Museum of Art — a first for a fashion photographer. Avedon was so iconic that Fred Astaire’s fashion photographer character in the 1957 film “Funny Face” was based on Avedon, who was on the set, according to Lewin.

“His gift was instinctive but he always was up-to-date about everything. He was reading all the time. He was on top of anything new, any trends. He would be ahead of the time many times,” Lewin said. “He was into the arts, politics — wherever the mood of the country was, he understood it. He photographed the peace movement, everyone from the Chicago Seven to many others.”

Avedon, who died in 2004, is legendary among photographers for both his fashion photography and portraiture which spanned scores of history-making personalities like Pablo Picasso, John F. Kennedy and Fidel Castro. Avedon’s training was top-notch, having studied at The New School for Social Research under Harper’s Bazaar art director Alexey Brodovitch and he later joined the magazine himself.

Lewin spent seven to 10 years trying to complete his “Avedon” book, which was held up due to numerous changes, litigation with the Richard Avedon Foundation that was eventually settled out of court and switching publishers. Moving forward, Lewin said, “The book is finally out. It’s very positive and that’s where I’m going with it.”

A shot of Avedon hiding behind a mask of his own likeness graces the cover. Lewin said he created the mask and printed 75 of them to surprise Avedon after his 1970 opening at the Minneapolis Institute of Art. After the fact, Avedon indicated that he was not one for surprises, which Lewin said he took to heart. The first and most lasting lesson was learned years before. Avedon once told Lewin and Earl Steinbicker, (who was the studio manager at the time), “’There is no such thing as impossible. Everything has a solution. Go back and think about it,’” Lewin said. “Sure enough, we thought about it long enough and came up with a solution. I have never said from then on, ‘It can’t be done.’ That has been a life lesson.”

The Powerhouse-published book is also meant to be educational, highlighting certain techniques such as solarization that was used for The Beatles’ posters in 1967. There are also details about how they worked and anecdotes about Lewin’s travels for assignments with Avedon. The photo-heavy tome is geared for generations that grew up with the Internet. In addition to his partner in life’s encouragement, Lewin said he was motivated to do the book after giving a round-table talk at Pratt to graduating students. “I talked about that time. I talked about Irving Penn, Richard Avedon and other blank faces. There were lots of blank faces. They were like, ‘What is he talking about?’ I was sort of shocked. On the way back to the studio I thought, ‘I guess I have to write the book because that is part of history that is going to be forgotten.’”

Lewin first started working for Avedon in 1964 for a weekly salary of $65, and he also worked for Hiro for the first few years. Avedon never went into the darkroom during the time that Lewin worked with him. “Most photographers don’t go into the darkroom. They send their film to labs or they hire people to print for them. That’s also a lost art at this point because everybody’s doing digital,” Lewin said.

For her spring collection, Mastroianni created a black-and-white lineup and she silk-screened some of the book’s images for select items such as a Sixties-inspired go-go dress. Her designs range from $4,000 to $24,000. An architectural coat features an image of a tree that was photographed in Paris in 1966 that is featured in the book. After Avedon and Polly Mellen dreamt up the idea of shooting a large tree in a studio setting, Lewin had to find one, which was no easy feat. Lewin notes in the book that taking down trees was not allowed in Paris unless they were dead or endangered. With help from Paris Match’s Patrice Habans, a former trainee in Avedon’s studio who was friendly with the mayor of Paris at that time, they were allowed to cut down a 40-foot tree that was dying outside of Paris. “Then they had to raise the electrical wires in Paris in the middle of the night to bring it in. They reassembled it in the Grand Palais for this photoshoot,” Mastroianni said.

Referring to the period that Lewin’s book covers, the designer said, “This was one of the most exciting times in fashion, in art, in pop, in culture. It was such a transitional time. So many wonderful and new things came out of that period that we are honestly still riding on that…People look at it, they relate to it and it puts a smile on their faces.”