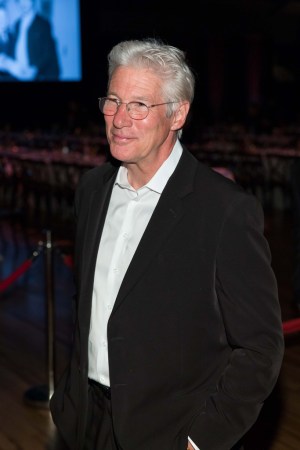 “You see film clips of my movies, and I see my life, starting at 26-years old in ‘Days of Heaven,’” said Richard Gere, accepting his acting award at the 58th annual San Francisco Film Society gala on Monday night. He thanked Francis Coppola, who presented the award.

The evening was sponsored by Net-a-porter.com, and it was the 14-year-old fashion Web site’s first foray into entertainment sponsorship.  “From our Style Suite (for by-appointment shopping) to our partnership with the San Francisco Film Society, the Bay Area is a very important market for Net-a-porter. We are delighted to foster a dialogue between the entertainment, technology and fashion communities via this cultural platform,” said Heather Kaminetsky, vice president of marketing and sales for Net-a-porter Americas.

Last Thursday, Mr Porter celebrated a special San Francisco issue of its Journal with a style show at The Battery penthouse, with honorees including Trevor Traina, Ken Fulk and Daniel Lurie. The men’s site last week launched Mr Porter’s exclusive 501 CT capsule line of handmade men’s jeans created in collaboration with Levi’s and produced in San Francisco’s Eureka Lab. Mr Porter is the first brand partner to have design input in to the iconic 501 jean style. The following night, Todd and Katie Traina hosted a cocktail party at their home to celebrate the Film Festival.

“San Francisco is one of the most interesting cities in terms of men’s style right now,” said Mrporter.com editorial director John Brodie. “Unlike other cities which break down by tribe or industry, there’s this incredible melting pot going on there between the new ideas of the technorati and the seasoned sophistication of the establishment.”

On Wednesday, the crew heads to Los Angeles, where Crystal Lourd and Jacqui Getty will host a dinner at Sunset Tower for Net’s global head of buying, Sarah Rutson.