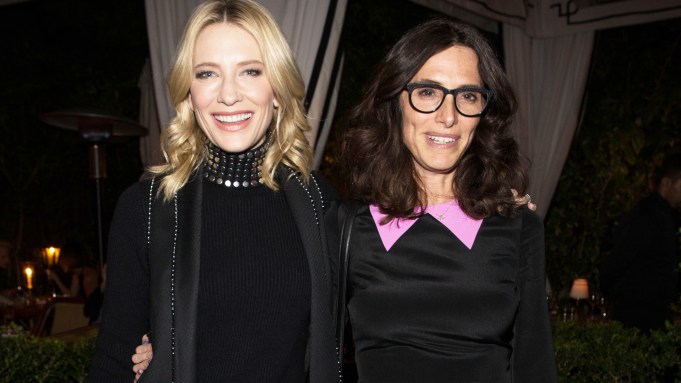 If you’re going to host a dinner about Hollywood style, might as well do it right. So Net-a-porter’s vice president of global buying, Sarah Rutson, tapped stylist Elizabeth Stewart and her longtime client, Oscar winner Cate Blanchett, to cohost an affair at Chateau Marmont on Thursday night.

“We’re about creating the future of fashion and stylists like Elizabeth are about creating the future of style,” said Rutson. “So many women around the globe are looking at celebrities not just on the red carpet. The reality is they are being dressed by stylists for their off-duty moments like walking through airports or coming out of their apartment building or taking their kids to the park.” Rutson said she sees daily spikes in sales if a celebrity is photographed wearing a certain piece.

“That’s constantly happening because of social media. Just like runway shows, the customer is seeing everything in real time. This is why stylists are the image-makers of today, and why we are here tonight to acknowledge that fact,” she said.

As for why Blanchett remains at the top of the heap, she said, “Cate has this innate elegance. The first thing you notice is her, never her dress first, yet she’s also known for her style.”

Blanchett, who was in town to promote her film “Carol,” which features costumes by Sandy Powell that she called “fantastic silhouettes,” said she was at Stewart’s beck and call.

“I’d do anything for her. She’s wonderful. She’s such an extraordinary connector of people and a great supporter of emerging designers as well as established labels and we’ve got a really shared aesthetic, so I love being in dialogue with her.”

Blanchett called Net-a-porter “a bit of a no-brainer, really. It’s an interesting mash-up of things. The edit they put together often makes you think about lines and silhouettes and labels and designers in a slightly different way,” she said.

Stewart also had clothes on the brain, saying, “I want this dinner to start on time because we also have fittings to do tonight.”