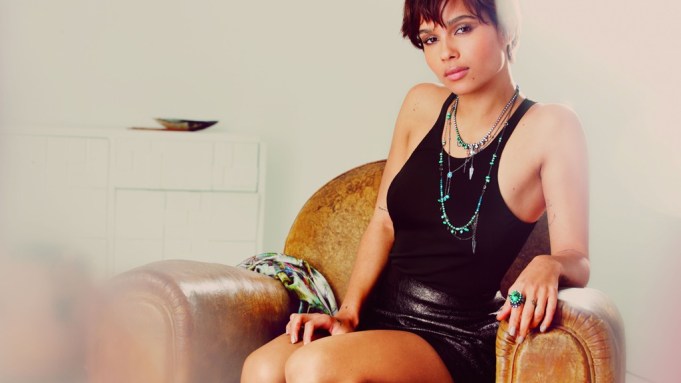 NEW TEAM: Actress, singer and model Zoë Kravitz is adding another notch to her belt this March — jewelry designer. The 23-year-old has collaborated with Swarovski Crystallized on a capsule collection of bracelets, necklaces, rings and earrings incorporating her birthstones, turquoise and tanzanite, and other Swarovski Elements.

“I wanted it to feel organic and fun,” Kravitz told WWD. “Something that would allow each person to make it their own.”

The nine-piece collection, executed in silver with shades of blue, has a tribal, earthy feel. “I was inspired by places I want to travel such as India and Morocco….Those countries have such vivid landscapes so I wanted to pull in color from there,” Kravitz said.

Kravitz is also the face of the campaign, shot by Guy Aroch. Of her preferred styling technique, she said: “Sometimes there is beauty in simplicity and sometimes it’s fun to pile it all on.”

The line, which ranges in price from $90 to $194, will launch at Swarovski Crystallized stores in New York, London and Austria as well as on swarovski-crystallized.com.