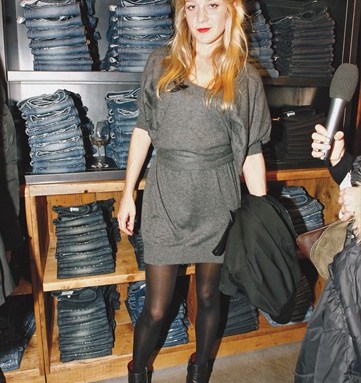 FIRST LADY UNDER FIRE: Amid all the praise of First Lady Michelle Obama’s fashion choices for the inaugural festivities, the Black Artists Association is taking her to task for not wearing anything by an African American designer. Cofounder Amnau Eele said Wednesday she will make a formal appeal to the First Lady’s office on behalf of the BAA. “It’s fine and good if you want to be all ‘Kumbaya’ and ‘We Are the World’ by representing all different countries. But if you are going to have Isabel Toledo do the inauguration dress, and Jason Wu do the evening gown, why not have Kevan Hall, B Michael, Stephen Burrows or any of the other black designers do something too?” Eele said. The BAA leader was a runway model in her own right for Yves Saint Laurent, Giorgio Armani, Bill Blass and others.

Asked if perhaps the First Lady isn’t looking at the world colorlessly, Eele said, “It’s one thing to look at the world without color but she had seven slots to wear designer clothes. Why wasn’t she wearing the clothes of a black designer? That was our moment.”

NICE GOING: Chloë Sevigny joined Renzo Rosso for the opening of his largest Diesel Planet store to date on Tuesday night, as men’s fashion week in Milan wound down. “I welled up while watching [President Barack Obama’s] inauguration from my hotel room,” said Sevigny. The actress and style maven said she’s heading to Paris next to showcase her new men’s-unisex line. “It’s skinny, chain-y, stud-y,” she enthused. Sevigny’s tour of Europe doesn’t stop in France and moves on to Wales to film “Mr. Nice,” in which she will play the wife of famed smuggler Howard Marks. “I am really nervous about my English accent,” she confessed. Meanwhile, across town, Victoria and David Beckham caused a stir as they arrived at 10 Corso Como for a Fendi/Vogue Italia party. “Milan is wonderful,” Victoria Beckham said. “David loves playing soccer here and it is great for the kids.” However, the Beckhams have no plans to abandon California for the Italian fashion capital. “At the moment we will divide our time between the two.”

CHAIR MAN: Karl Lagerfeld is a household name — and Paris home decorating fair Maison & Objet knows it. The multitasking designer has been named the fair’s “creator” of the year and will be honored at a gala dinner next week at the tail end of Paris couture week.

ITC REACHES OUT: It’s not all doom and gloom at the Rainbow Room. Last week, in Cipriani’s Pegasus Suite at 30 Rockefeller, the Italian Trade Commission hosted the presentation of Spring 2010 textile trends for Moda In, Ideacomo and Prato Expo, all promoters of Italy’s textile trade fair Milano Unica. “Italian manufacturers are still appealing to customers, even in this economic climate,” said Aniello Musella, executive director of the ITC’s American office. “We are still leaders in the market.” And indeed the trends cooked up by Milano Unica’s creative director Angelo Uslenghi and his team reflect this strength. From a trend toward quirky simplicity to implementing biological research in textile development, it is obvious that Italian mills are eager to innovate. “The words ‘trend’ and ‘fashion’ can sounds so flaky,” Uslenghi said. “We give the mills suggestions and a bit of direction. Where they take the ideas is what keeps the Italian textile industry so vibrant.”

LADIES FIRST: First Ladies and their style was the well-worn subject du jour at a book signing Friday for Liza Mundy’s Michelle Obama biography at Roger Vivier’s Paris flagship. The Washington Post journalist, whose book is titled “Michelle Obama, First Lady,” commended the First Lady for projecting a healthy body image for young Americans, blessed with an athletic frame that looks good in clothes. “Whereas Carla [Bruni-Sarkozy] — who looks great in jeans and a T-shirt — has to dress up a little bit when traveling, with Michelle Obama you really get the feeling that she’s wearing her own clothes,” commented Roger Vivier ambassador Ines de la Fressange.