Party features "Star Wars," "Back to the Future" references — even a DeLorean. 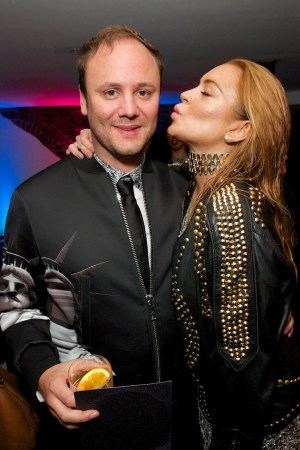 TIME TRAVEL: Nicholas Kirkwood’s 10-year anniversary party was an ode to the Eighties — when he was a child — complete with a DeLorean and lots of “Star Wars” talk.

“I was born in the same year as Pac-Man and I used to play the game in arcades — it’s been 20 years since I played,” he reminisced, adding that he cannot wait for the release of “Star Wars: Episode VII – The Force Awakens.” He said his favorite characters are Princess Leia “because she’s fab, isn’t she?” and C-3PO. “He’s a little bit annoying but he looks cool,” Kirkwood added.

There was even a replica DeLorean — the famous car from “Back To The Future” — parked outside the venue on Saturday night, providing a prime social media photo-op for guests. Inside the party, a special carpet had been laid to look like a sci-fi laser fight and arcade games were set up for guests.

The anniversary capsule collection was on display, with some pairs shown in the special presentation boxes they’ll be sold in, which recalled the packaging of Eighties toy figurines. “So there are 10 styles and they’re all based on ones that I’ve done over the last 10 years. I’ve fused that with the idea of all the things that I loved in the first 10 years of my life-like Pac-Man, ‘Star Wars’ and ‘Back To The Future’ references, and all these kind of fast cars and toys,” said the designer.