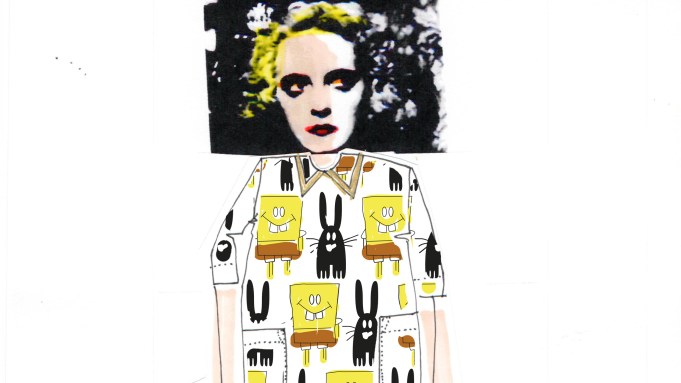 SPONGEBOB GOLD: Nickelodeon International and Viacom Consumer Products have collaborated with a host of designers on the SpongeBob SquarePants Gold collection, which will be unveiled during London Fashion Week.

Peter Jensen, Bobby Abley, Salar, Maria Francesca Pepe, Suecomma Bonnie and Bad Denim are among the names that have created men’s and women’s apparel, footwear and accessories. They’ve put their own spin on the cartoon character who is celebrating his 18th birthday.

The collection will be unveiled at event hosted by the company on Feb. 18 and exclusively outside of the U.S. in May.

“I have watched SpongeBob for as long as I can remember,” said Jensen. “He is part of my Saturday morning ritual in the same way a boiled egg with salt is. Mrs. Puff is my absolute favorite, but of course I love SpongeBob, Patrick, Gary and the rest of the clan. It’s been great fun to be part of this project. We were allowed to hand-draw Spongebob for this collection so it made it look more naïve.”

“By bringing SpongeBob into their world and incorporating the element of gold, our collaborators have created beautiful items unlike anything we have seen before,” said Charlotte Castillo, senior vice president of brand management and creative for Nickelodeon and Viacom Consumer Products.

SpongeBob SquarePants, which launched in the U.S. in 1999, is viewed in more than 180 countries.