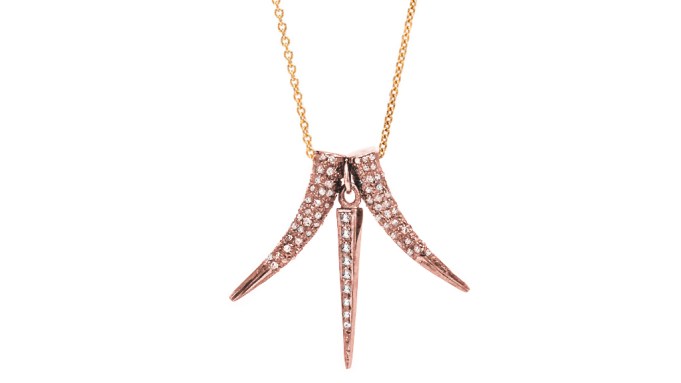 JesseRay Vasquez, cofounder of contemporary apparel line Sjobeck Malibu, has teamed with partner Nickho Yersel, a third generation jewelry manufacturer, to form a line of contemporary fine jewelry called Nickho Rey. The line, which launches online and in various specialty stores this week, ranges from $175 to $1,375 with average price points in the $200 to $300 range.

Capitalizing on the current market’s desire for fashion-forward yet accessible fine jewelry made with gold, diamonds and gemstones, the duo eliminated the sixfold markup that inflates most finished jewelry prices by producing in Yersel’s family’s facilities in Dallas. Their direct-to-consumer e-commerce site features earrings, necklaces and bracelets styled in modern, mixed-metal combinations made for layering and day into eveningwear.

Vasquez and Yersel met at the Coterie trade show in New York, where Yersel was selling his family’s costume jewelry line and Vasquez was selling Sjobeck. After Yersel created a diamond studded onyx horn pendant for Vasquez that began to attract inquiries, they knew they were onto something.

“Every girl wants to wear diamonds but many can’t afford to,” Vasquez said. “We’re bringing quality pieces to market without the markup, so women can choose to pay the same amount for costume jewelry or fine jewelry.”

After a Hamptons, N.Y.,  trunk show last summer with New York retailer Otte, Vasquez saw the demand and reached out to some of his Sjobeck wholesale accounts. Shortly afterward, he found customers in 17 other boutiques around the country including Stanley Korshak in Dallas; Z-Life in Rye, N.Y.; Carolina Boutique in Mill Valley, Calif.; P.45 in Chicago, and several Los Angeles boutiques including Bleu LA, AltHouse and Kyle by Alene Too, which carries Nickho Rey in its South Hampton, N.Y., and Boca Raton and Palm Beach, Fla., stores.

Yersel explained that he began designing pieces with “diamond dust” or the smaller diamonds leftover from cutting larger stones. He then added rubies, emeralds, sapphires and South Sea pearls to the mix, along with less expensive quartz and black spinel. The styles range from delicate diamond pendants with layered, mixed metal chains to larger drop earrings featuring cabochon gemstones.

“At first, women don’t believe the jewelry is real when they learn the prices,” Yersel said. “It’s almost as if they want to pay more. But we’re educating them, and once they learn, they want to buy several pieces at once.”