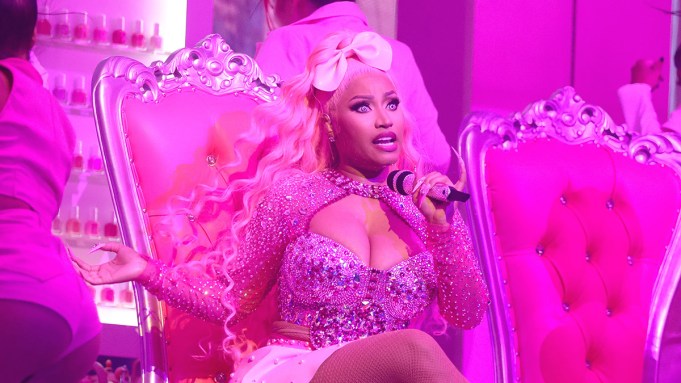 Nicki Minaj channeled Barbiecore style trends with gusto on Sunday in Newark, N.J., at the MTV Video Music Awards. The rapper, who was the recipient of the Michael Jackson Video Vanguard Award, hosted the show with LL Cool J and Jack Harlow.

She performed a medley of hits such as her verse from Kanye West’s “Monster,” “Moment for Life,” and her recently released single “Super Freaky Girl,” which debuted at the top spot on the Billboard Hot 100 this past week.

During her performance and while accepting the coveted award, she wore a shimmering long-sleeve top adorned in pink and silver embellishments with a corset element and heart-shaped design at its bodice. Her skirt, coupled with pink fishnet stockings, followed a similar palette and embellished design as it fused vibrant colors and rhinestones throughout.

Minaj wore a pair of lace-up black boots with pink laces. She donned matching wavy hair with a pastel bow styled by Arrogant Tae, who’s been at the forefront of Minaj’s many eclectic hairstyles.

Minaj was nominated for Best Hip Hop Video for “Do We Have A Problem?” featuring Lil Baby, and Song of the Summer for “Super Freaky Girl.”