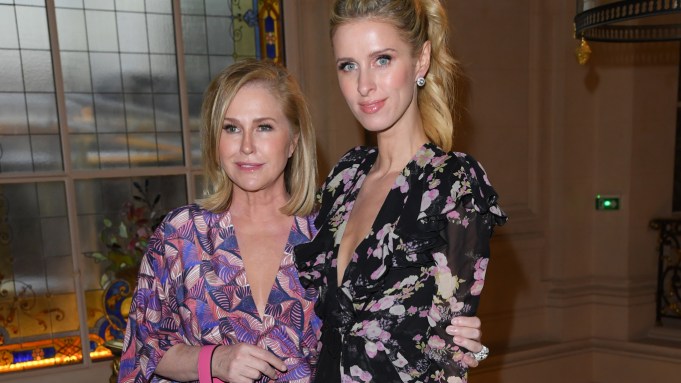 TIME WITH MOM: Hanging out with Mom has never been so fashionable.

Nicky Hilton Rothschild and her mother Kathy Hilton weren’t the only mom and daughter pair streaming into the Shangri-La Hotel Monday to take in Giambattista Valli’s haute couture gowns in Paris. It was all part of their jaunt to the fashion capital for shopping, culture and food.

“We’ve been doing this since she was 13,” chimed in Hilton, ticking off their favorite activities in the city: fashion shows, shopping, antiquing and visiting the Louvre.

“Ammmi Louis!” her mother nodded in agreement. Also on the agenda: scouting for things to decorate a new property in Los Angeles.

“I like Art Deco, Georgian — very eclectic. I’m doing a new house now so it’ll be a little bit of everything,” she confided, before heading upstairs with her daughter to see the latest creations from Valli — pausing for the cameras along the way.

Tahira Chawla posed on the grand staircase with her mother, Kalyani Chawla, a friend of the designer, who noted his success lately in India. “He’s been dressing all these Bollywood stars,” she remarked, adding that Valli has also taken to India. “He’s so happy there.”

Arriving earlier, Elena Perminova stood for photos with her three young children on a terrace of the hotel — mom and kids all in sunglasses; the boys in slouchy trousers, mother and daughter in loose jeans.

Chiara Ferragni was also having a family moment, and turned up with her sister Valentina — Ferragni has a final stretch of work to wrap up in July and then she’ll be off to Ibiza for down time before hitting the fall promotion tour for her upcoming documentary.