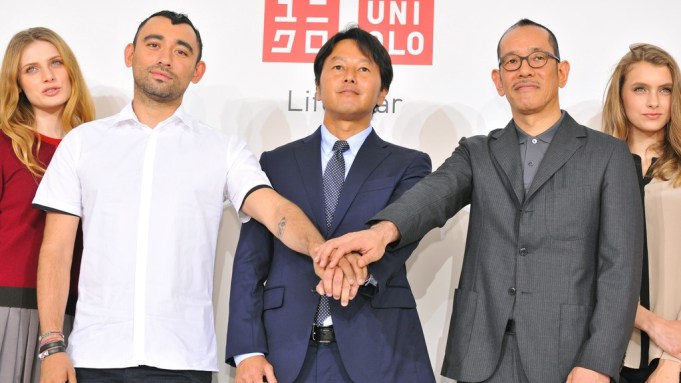 BUSY BEE: Nicola Formichetti is currently in Tokyo, where he attended a Tuesday launch event for Uniqlo’s new range of silk and cashmere products. Formichetti has been working with Uniqlo since 2006, but has seen his role with the brand intensify over the years. He currently holds the title of creative fashion director, and even appeared in a recent television ad for the brand in Japan.

“It’s been a really great journey, you know, I started from a small job window styling the New York stores and slowly became closer and closer, and now I look at almost every part of the creative development, from first development to advertisement to collections,” he said. “And I work really closely [with Uniqlo’s design director Naoki Takizawa] now on the collection. He’s been great — it’s getting more fun and really enjoyable, because I love working with Japanese people.”

Formichetti was recently named artistic director of Diesel but he said he’s not worried about balancing out his various commitments.

“I live between Europe, America and Asia. I’ve terminated my other jobs to concentrate on Uniqlo, and…I still have time to do lots of other things,” he said.

Formichetti has one less high-profile responsibility to worry about. The designer-stylist said he is no longer working closely with Lady Gaga, who just this week announced the release date of her next album.

“She’s going to be my BFF forever, but my ex-assistant Brandon [Maxwell] is heading that project,” he said. “I’m too busy with [other commitments]. I’ve done two albums with her, it’s been like five years, and you know, I’m always going to be involved somehow, but I cannot do it every day. She changes 12 times a day; it’s insane.”