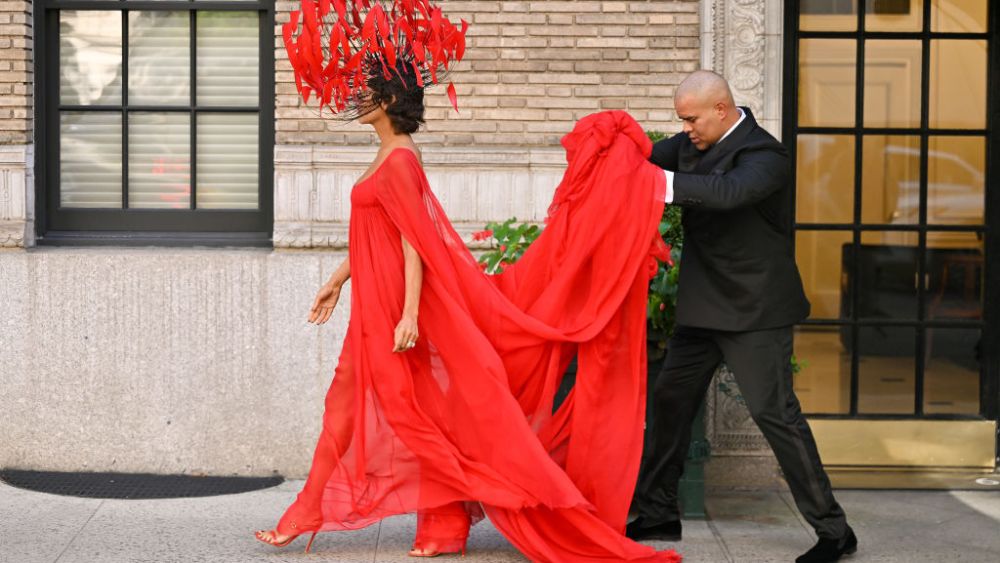 Nicole Ari Parker will make a bold style statement in the second season of HBO Max’s “And Just Like That,” the reboot of “Sex and the City.”

The actress was seen filming scenes on Tuesday in New York wearing a flowing red custom Valentino dress and striking headpiece. The dress had an Empire waistline and a billowing train that was sheer below the skirt line. She coordinated with a pair of strappy red sandals. The wardrobe team’s Instagram account, And Just Like That Costumes, shared photos from the film set, including Valentino tags emblazoned with “Valentino for And Just Like That.”

The look by Valentino is similar to Frances McDormand’s outfit from the 2018 Met Gala, which included an almost identical headpiece in turquoise designed in collaboration with Philip Treacy for Valentino’s spring 2018 couture collection. The theme for that year’s Met Gala was “Heavenly Bodies: Fashion and the Catholic Imagination.”

In “And Just Like That,” Parker plays Lisa Todd Wexley, a friend of longtime “Sex and the City” franchise character Charlotte, played by Kristin Davis. Parker’s character is an Upper East Side mom known for her fashion sense married to a hedge fund manager played by Christopher Jackson.

“And Just Like That” season two is currently filming in New York City. In addition to Parker, the show’s main cast, including Sarah Jessica Parker, Cynthia Nixon and Kristin Davis, will all return.