Decked out in Fendi, the film star teased the crowds with an air kiss before snipping the red ribbon. 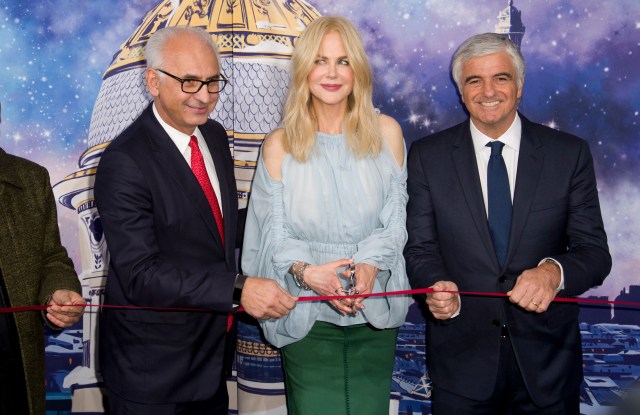 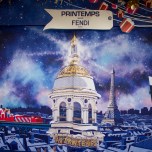 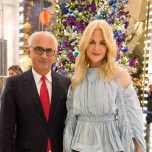 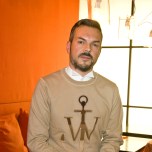 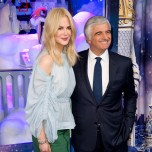 As flocks of people with phone cameras pressed in for a glimpse of the animated windows, the Fendi-clad film star blew a kiss and smiled flirtatiously before proceeding with the ribbon-snipping.

Printemps chose a travel theme for the season, sending its kid characters, Jules and Violette, around the world to gather gifts for the Paris store.

The young heroes have a little help from their friends, in the form of 70 puppets strung up with 8 miles of fishing line, lit up by an awning of sparkling gold flowers and flashing white lights.

Means of travel include a ship and a fleet of hot-air balloons — to transport the shoes, lifting them up and down, and from side to side. There are also planes, trains and a brand new C3 Aircross vehicle made by the French carmaker Citroën.

The brand joined a roster of unusual partnerships for the holiday decorating, including low-cost airliner Easyjet, high-speed train transporter Thalys and the regional tourist agency of Reunion Island, which joined the leather good brand MCM and Fendi.

The real life car, tucked into a desert scene decorated with shoes, leather bags and a skateboard, had to be taken apart in order to squeeze it through a 35-inch space to enter the display, explained David Molière, the window designer.

A dozen years into his job, Molière confessed to weekend eavesdropping on families viewing the window displays. His measure of success? “When a child is glued to the window and doesn’t want to leave,” he said.

Once the window displays were opened, revealing a fantasy city scene with the Eiffel Tower and boogying fur Fendi Wonders creatures while a shiny toy train zipped past, Kidman went inside the store. She greeted shoppers and marveled at the store displays, leaning forward for a selfie with one woman. She also paused in front of the Fendi display in the store’s atrium, where a three-wheeled Italian apecar stood, all white with bright lights and a Fendi logo amidst the colorful bags and accessories. Towering above was a replica of the Palazzo della Civilita Italiana building façade, home to Fendi’s Rome headquarters.

Pietro Beccari, chief executive officer of Fendi, said it was the first time the brand had taken over the entire atrium of the department store, and that the idea was to project a creative, glamorous and fun atmosphere.

“We wanted to bring a new aspect to Christmas, and we all say that retail is about experiences more than products…so we wanted to celebrate travel,” said Printemps chief executive officer Paolo de Cesare.

“There are more people travelling now than ever before,” he added.

Business at the high-end department store has been improving in recent months, he noted.

“Clearly the market is picking up in Paris, clearly there is very positive momentum on tourism and there is a certain optimism in the local economy that we perceive with the local customer — the back to school period was good,” he said.

While cautioning that it is too early to project performance for the year, with the holiday season generally accounting for around 20 percent of annual business, de Cesare flagged “good mid-single digit growth so far in the year, which means we are recovering what we lost in 2016,” when sales slumped following a string of terrorist attacks.

He expects brisk business this holiday season: “I think it will be a good vintage,” he said.

“There is one moment where retail can give its best and that’s Christmas, because a store is such a joy with the Christmas trees, with the decoration, it’s just such a joy and we see it even in the years of crisis, Christmas always works,” added de Cesare, surveying a ring of trees decorated with teal blue ornaments, dark purple orchid decorations and fake birds with real green feathers. The color scheme, notable for the absence of the season’s traditional red, was scattered throughout the store, but here it served as a highlight to a historic art deco mural in pale pastels, a floral scene depicting spring.

Fendi to Hold Exhibit on Its Relation With Films