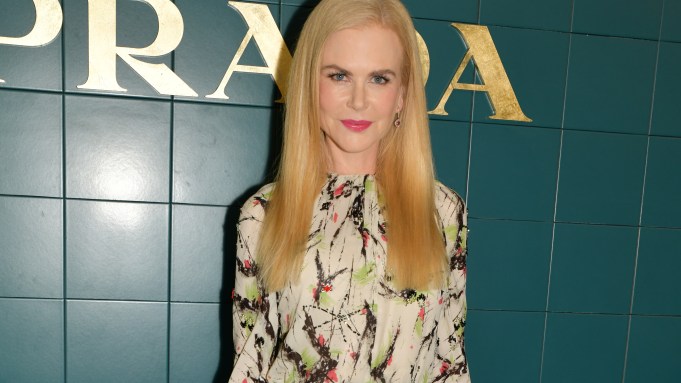 PRADA’S BFF: Despite being a self-professed fan of Miuccia Prada, Nicole Kidman attended the designer’s show for the first time on Wednesday. “I’ve been friends with Miuccia, for [pause, smiling] well, for many, many years, over 20 years, but this is my first show. I love her and I love supporting her.” Kidman said she was also eager to see the exhibition curated by Wes Anderson and staged at the Fondazione Prada, “Spitzmaus Mummy in a Coffin and Other Treasures.” “I am going to try and stay here for a couple of days and then take a little break on holiday. I’m excited to see Milan, when I was here before it was literally for a couple of hours. So there’s a bit of glamour and then a little bit of rest and relaxation,” Kidman said.

Similarly, Regina King said she has a new role: tourist. The actress visited Florence for a few days before coming to Milan. “I actually started my trip in Firenze, and walked until my feet hurt and ate a lot, too. It was sneakers all the way.” Upcoming projects include an HBO series that’s about to be released called “Watchmen,” and her feature film directorial debut. The movie is called “One Night in Miami,” and she’s doing the casting now. “It’s terrifying and exhilarating at the same time.”

Prada’s list of guests ran from Anderson himself and his wife, writer and illustrator Juman Malouf, to actress Ella Balinska; poet and activist Amanda Gorman; musician Jarvis Cocker, and Robin Hurlstone, to name a few, as well as Sadie Sink, who has a lot on her plate, and acting is only the start of it. The skateboarding “Stranger Things” actress just finished filming “Fear Street 2” and is about to start her senior year of high school — and take her SATs. That said, she’s still weighing whether to go to college or continue on her acting. Asked whether there was a new “Stranger Things” season cooking, she said. “I can’t say — but hopefully. I know the fans are waiting.”